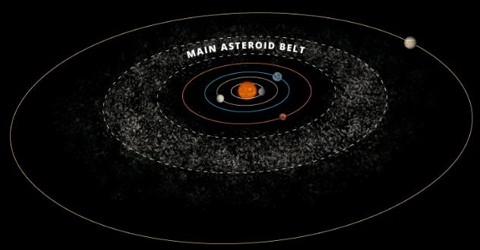 Early in the life of the solar system, dust and rock rotating the sun were pulled together by gravity into planets. But Jupiter, the biggest planet, kept a number of the pieces from coalescing into another planet. Instead, its gravity disrupted the formation process, leaving a range of unattached asteroids.

The Main Belt once contained adequate material to form a planet almost four times as large as Earth. Jupiter’s gravity not only stopped the formation of such a planet, it also swept most of the material clear, leaving far too little behind for a planet of any size to form. Indeed, if the entire mass of the Main Belt could somehow create a single body, it would weigh in at less than half of the mass of the moon.

Discovery of the asteroid belt

The 18th-century astronomer Johann Titius noted a geometric model in the layout of the planets and used it to forecast the existence of one between Mars and Jupiter. Astronomers scoured the heavens in search of this missing body. In 1800, 25 astronomers formed a group known as the Celestial Police, each searching 15 degrees of the zodiac for the missing planet. But the discovery of the first body in this area came from a nonmember, Italian astronomer Giuseppe Piazzi: he named it Ceres. A second body, Pallas, was found a little over a year later. Despite common perceptions, the Asteroid Belt is generally empty space, with the asteroids widen over a huge volume of space. Nevertheless, hundreds of thousands of asteroids are at present recognized, and the whole number ranges in the millions or more. Over 200 asteroids are known to be larger than 100 km in diameter, and a survey in the infrared wavelengths has shown that the asteroid belt has 0.7–1.7 million asteroids with a diameter of 1 km or more.

Some asteroids are large, solid bodies — there are more than 16 in the belt with a diameter greater than 150 miles (240 km). The principal asteroids, Vesta, Pallas and Hygiea, are 250 miles (400 km) long and bigger. The area also contains the dwarf planet Ceres. At 590 miles (950 km) in diameter, or about a quarter of the size of our moon, Ceres is round yet is measured too small to be a full-fledged planet. However, it makes up around a third of the mass of the asteroid belt.

Other asteroids are piles of rubble held jointly by gravity. Most asteroids aren’t quite huge enough to have achieved a spherical shape and instead are irregular, often resembling a lumpy potato. The asteroid 216 Kleopatra resembles a dog bone.

In 2007, NASA launched a mission, Dawn, to visit Ceres and Vesta. Dawn reached Vesta in 2011 and remained there for over a year. It should reach Ceres in 2015.