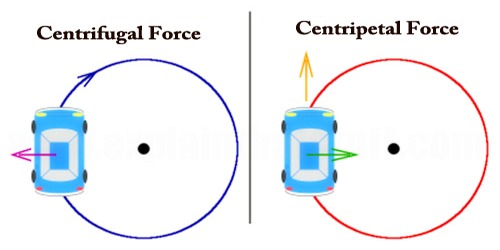 Centripetal force and centrifugal force, action-reaction force pair associated with a circular motion. Some geographers realized that just as different forces can pull things apart or push them together; this is also true of geopolitics, or the relationship between people, politics, and physical space.

Force acts differently on objects depending on the type of motion it exhibits. In the case of curvilinear motion, two types of force come into the picture, i.e., the centrifugal force and centripetal force. Centripetal force is the force acting towards the center of the circular path. Whereas, the centrifugal force acts in a direction pointing away from the center of the circle.

According to Newton’s first law of motion, a moving body travels along a straight path with constant speed (i.e., has constant velocity) unless it is acted on by an outside force. For a circular motion to occur there must be a constant force acting on a body, pushing it toward the center of the circular path. This force is the centripetal (center-seeking) force. For a planet orbiting the sun, the force is gravitational; for an object twirled on a string, the force is mechanical; for an electron orbiting an atom, it is electrical. The magnitude F of the centripetal force is equal to the mass m of the body times its velocity squared v 2 divided by the radius r of its path: F = mv 2/ r. According to Newton’s third law of motion, for every action, there is an equal and opposite reaction. The centripetal force, the action, is balanced by a reaction force, the centrifugal (center-fleeing) force. The two forces are equal in magnitude and opposite in direction.

Centripetal force is a force acting on particle performing the circular motion, which is a long radius of the circle and directed towards the center of circle. Centripetal force acts at right angles to the tangential velocity of the particle, there is no displacement in the direction of force, and hence no work is done by centripetal force.

There are many applications that exploit centripetal force. One is to simulate the acceleration of space launch for astronaut training. When a rocket is first launched, it is so laden with fuel and oxidizer that it can barely move. However, as it ascends, it burns fuel at a tremendous rate, continuously losing mass. Newton’s Second Law states that force equals mass times acceleration or F = ma.

In most situations, mass remains constant. With a rocket, though, its mass changes drastically, while the force, in this case, the thrust of the rocket motors, remains nearly constant. This causes the acceleration toward the end of the boost phase to increase to several times that of normal gravity. NASA uses large centrifuges to prepare astronauts for this extreme acceleration. In this application, the centripetal force is provided by the seatback pushing inward on the astronaut.

Centrifugal Force Formula is given as the negative product of mass (in kg) and tangential velocity (in meters per second) squared, divided by the radius (in meters). This implies that on doubling the tangential velocity, the centripetal force will be quadrupled. Mathematically it is written as: Fc = – mv2 / r

Centrifugal force is often confused with its counterpart, centripetal force because they are so closely related essentially two sides of the same coin.

“The difference between centripetal and centrifugal force has to do with different ‘frames of reference,’ that is, different viewpoints from which you measure something,” said Andrew A. Ganse, a research physicist at the University of Washington. Centripetal force and centrifugal force are really the exact same force, just in opposite directions because they’re experienced from different frames of reference.