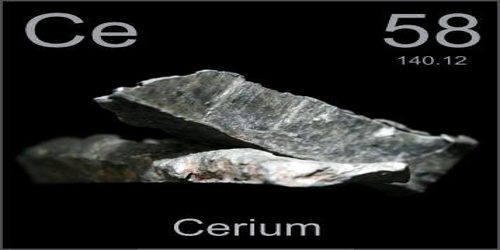 Cerium is a shiny, gray metallic element of the lanthanide series. It is ductile and malleable and is used in electronic components, alloys, and lighter flints. Its atomic number 58; atomic weight 140.12; melting point 795°C; boiling point 3,468°C; specific gravity 6.67 to 8.23; valence 3, 4. It is also used in glass polishing and as a catalyst in self-cleaning ovens. Cerium has no biological role and is not very toxic. Cerium was first identified by the Jöns Berzelius and Wilhelm Hisinger in the winter of 1803/4. Martin Klaproth independently discovered it around the same time.

Although cerium is one of the 14 lanthanoid (aka rare earth) elements it was discovered independently of them. There are some minerals that are almost exclusively cerium salts such as cerite, which is cerium silicate. A lump of this mineral had been found in 1751 by Axel Cronstedt at a mine in Vestmanland, Sweden. He sent some to Carl Scheele to analyse it but he failed to realise it was new element. In 1803, Berzelius and Hisinger examined it themselves and proved that it contained a new element.

Occurrences, Production and Properties of Cerium

Cerium occurs in various minerals, but the most important commercial sources are monazite and bastnäsite, where it makes up about half of the lanthanide content. Cerium is the easiest lanthanide to extract from its minerals because it is the only one that can reach a stable +4 oxidation state in aqueous solution. Because of the decreased solubility of cerium in the +4 oxidation state, cerium is sometimes depleted from rocks relative to the other rare-earth elements and is incorporated into zircon, since Ce4+ and Zr4+ have the same charge and similar ionic radii. Its elements can be classified based on their physical states (States of Matter) e.g. gas, solid or liquid. This element is a solid. Cerium classified as an element in the Lanthanide series as one of the “Rare Earth Elements” which can located in Group 3 elements of the Periodic Table and in the 6th and 7th periods. The Rare Earth Elements are divided into the Lanthanide and Actinide series. The elements in the Lanthanide series closely resemble lanthanum, and one another, in their chemical and physical properties. Their compounds are used as catalysts in the production of petroleum and synthetic products. Nearly 75% of all the elements in the Periodic Table are classified as metals which are detailed in the List of Metals.

Cerium has a variable electronic structure. The energy of the 4f electron is nearly the same as that of the outer 5d and 6s electrons that are delocalized in the metallic state, and only a small amount of energy is required to change the relative occupancy of these electronic levels. This gives rise to dual valence states.

Cerium is the major component of mischmetal alloy (just under 50%). The best-known use for this alloy is in ‘flints’ for cigarette lighters. This is because cerium will make sparks when struck. The only other element that does this is iron. Cerium(Ill) oxide has uses as a catalyst. It is used in the inside walls of self-cleaning ovens to prevent the build-up of cooking residues. It is also used in catalytic converters. Cerium(III) oxide nanoparticles are being studied as an additive for diesel fuel to help it burn more completely and reduce exhaust emissions.

Cerium sulfide is a non-toxic compound that is a rich red colour. It is used as a pigment. It is also used in flat-screen TVs, low-energy light bulbs and floodlights.

Cerium oxide is produced by heating bastnaesite ore, and treating with hydrochloric acid. Metallic cerium can be obtained by heating cerium(III) fluoride with calcium, or by the electrolysis of molten cerium oxide.