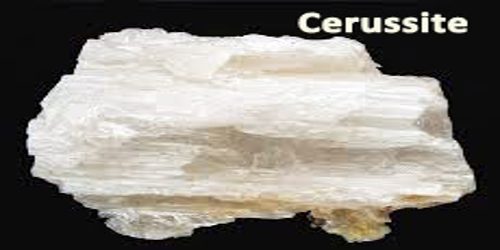 Cerussite (PbCO3) is a usually white mineral, found in veins. It is a source of lead. It is also called white lead ore. It is an interesting mineral, forming in an array of fascinating crystal formations and bizarre twinning habits. It is easily identifiable by its heavy weight, brilliant luster, and crystal habits. Cerussite also performs interesting reactions during blowpipe testing. Specimens may be fragile and should be handled with care. The name is from the Latin cerussa, white lead. Cerussa nativa was mentioned by Conrad Gessner in 1565, and in 1832 F. S. Beudant applied the name cruise to the mineral, whilst the present form, cerussite, is due to W. Haidinger (1845). Miners’ names in early use were lead-spar and white-lead-ore.

Cerussite mineral is usually colorless or white, sometimes grey or greenish in tint and varies from transparent to translucent with an adamantine lustre. It is very brittle, and has a conchoidal fracture. It has a Mohs hardness of 3 to 3.75 and a specific gravity of 6.5. A variety containing 7% of zinc carbonate, replacing lead carbonate, is known as iglesiasite, from Iglesias in Sardinia, where it is found.

The mineral may be readily recognized by its characteristic twinning, in conjunction with the adamantine lustre and high specific gravity. It dissolves with effervescence in dilute nitric acid. A blowpipe test will cause it to fuse very readily, and gives indications for lead.

Occurrences, Properties and Uses of Cerussite

Large single Cerussite crystals, as well as v-shaped twins and intergrown “snowflakes,” were found at Tsumeb, Namibia, which is a classic locality for this mineral. Fine crystals have also been abundant in Morocco at Mibladen and Touissit. In Australia, excellent Cerussite specimens have come from Broken Hill, New South Wales; and the Rum Jungle, Batchelor, Northern Territory. Many fine crystals have come from Motevecchio and Monteponi, Sardinia, Italy; Weardale, North Pennines, Durham, England; the Pentire Glaze Mine, St Minver, Cornwall, England; and the Nakhlak Mine in Esfahan Province, Iran. Cerussite forms some of the most interesting, complex, and varied crystals and groupings in the mineral kingdom. Its most prevalent form is as small, flat, thin plates, as well as prismatic and tabular crystals. Crystals frequently twin to form interesting shapes, such as star, heart, sixlings, and v-shaped twins. A highly coveted form is reticulated growths of thin crystals which form a delicate, snowflake-like mass. Also reticulated, acicular, radiating, coxcomb, in wheat sheaf form, fibrous, and massive. Crystal faces are usually striated.

Cerussite is an important ore of lead. It is also a popular mineral among collectors, especially when it forms attractive twinned crystals. Cerussite from certain locations is rich in silver thus may be used as a minor silver ore. Cerussite was once used as a white pigment. It is occasionally faceted into gems for collectors.