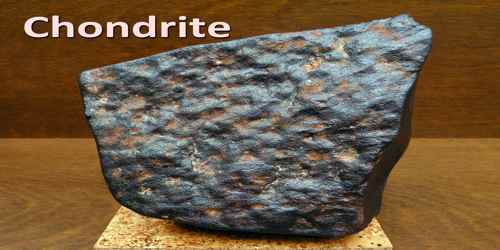 Chondrite is a stony meteorite that contains chondrules embedded in a fine matrix of the silicate minerals olivine and pyroxene. About 85 percent of all meteorites are chondrites. One of their characteristics is the presence of chondrules, which are round grains formed by distinct minerals that normally constitute between 20% and 80% of a chondrite by volume. Scientists believe that chondrites originated from the asteroids that orbit the sun between Mars and Jupiter during the early stages of the solar system. They account for up to 86 percent of all meteorite landings, with achondrites making up the remaining 14 percent. Chondrites are the most primitive of all asteroids, and they consist largely of calcium/aluminum inclusions (CIA). Many chondrites feature grains called stardust that pre-date the solar system that formed in supernovae or from other suns. They vary greatly in their composite structures according to where in the solar nebula they formed, and how many heating and cooling cycles they have undergone throughout their existence.

There are currently over 27,000 chondrites in the world’s collections. The largest individual stone ever recovered, weighing 1770 kg, was part of the Jilin meteorite shower of 1976. Chondrite falls range from single stones to extraordinary showers consisting of thousands of individual stones, as occurred in the Holbrook fall of 1912, where an estimated 14,000 stones rained down on northern Arizona. Chondrites formed about 4.56 billion years ago as part of the formation of their parent asteroids. They are chemically quite similar to one another and, apart from the most volatile elements (e.g., hydrogen and helium), to the Sun. Since most of the mass of the solar system is in the Sun, the initial composition of the solar system would have been similar to the Sun’s composition. The great age of the chondrites, their primitive chemistry, and the relatively unmodified state of their constituents all suggest that these meteorites retain a record of processes that happened in the solar nebula before and during the phase of planet formation. Nevertheless, the meaning of this record remains to be fully deciphered. The chondrites also contain material, including organic matter and tiny grains that formed around dying stars that predates the formation of the solar system.

Chondrites can also be categorized according to their petrologic type, which is the degree to which they were thermally metamorphosed or aqueously altered. Most chondrites contain the anhydrous silicate minerals olivine, orthopyroxene and clinopyroxene, and plagioclase, as well as the nickel-iron minerals kamacite and taenite and the iron sulfide troilite. Some contain claylike hydrous silicates.