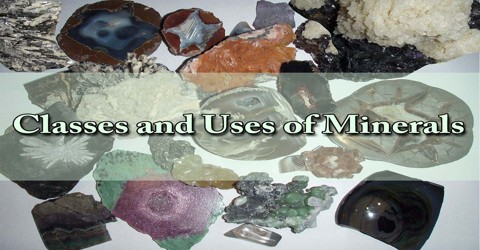 Classes and Uses of Minerals

Classes and Uses of Minerals

Minerals are naturally-occurring inorganic substances with a definite and predictable chemical composition and physical properties. A mineral is an element or chemical compound that is normally crystalline and that has been formed as a result of geological processes. Minerals are defined as solid, inorganic, naturally occurring substances with a definite chemical formula and general structure. Almost all chemical elements in the Earth’s crust are associated with at least one mineral. They vary in color, hardness, density, crystal form, crystal size, transparency, composition, location, and abundance. Some minerals are radioactive (uranophane), while others are magnetic (magnetite). Some are uncombined elements, such as gold, silver, sulfur, bismuth, copper and platinum. Certain minerals, such as fluorite (calcium fluoride), glow with a vibrant luminescence after exposure to ultraviolet light. Minerals are distinguished by various chemical and physical properties. Differences in chemical composition and crystal structure distinguish the various species, which were determined by the mineral’s geological environment when formed. Changes in the temperature, pressure, or bulk composition of a rock mass cause changes in its minerals.

Mineral classification can be an organizational nightmare. With over 3,000 different types of minerals a system is needed to make sense of them all. Mineralogists group minerals into families based on their chemical composition. There are different grouping systems in use but the Dana system is the most commonly used. he Dana system divides minerals into eight basic classes. The classes are: native elements, silicates, oxides, sulfides, sulfates, halides, carbonates, phosphates, and mineraloids. As the composition of the Earth’s crust is dominated by silicon and oxygen, silicate elements are by far the most important class of minerals in terms of rock formation and diversity. However, non-silicate minerals are of great economic importance, especially as ores. The majority of non-silicate mineral species are extremely rare, although some are relative common, such as calcite, pyrite, magnetite, and hematite. There are two major structural styles observed in non-silicates: close-packing and silicate-like linked tetrahedra. Hexagonal close-packing involves stacking layers where every other layer is the same (“ababab”), whereas cubic close-packing involves stacking groups of three layers (“abcabcabc”). Analogues to linked silica tetrahedra include SO4 (sulfate), PO4 (phosphate), AsO4 (arsenate), and VO4 (vanadate). The non-silicates have great economic importance, as they concentrate elements more than the silicate minerals do.

The largest grouping of minerals by far are the silicates; most rocks are composed of greater than 95% silicate minerals, and over 90% of the Earth’s crust is composed of these minerals. The two main constituents of silicates are silicon and oxygen, which are the two most abundant elements in the Earth’s crust. Other common elements in silicate minerals correspond to other common elements in the Earth’s crust, such aluminium, magnesium, iron, calcium, sodium, and potassium. Some important rock-forming silicates include the feldspars, quartz, olivines, pyroxenes, amphiboles, garnets, and micas. Every segment of society uses minerals and mineral resources everyday. The roads we ride or drive on and the buildings we live learn and work in all contain minerals. Some of common uses minerals are:

Aluminum – Aluminum is the most abundant metallic element in the Earth’s crust. Bauxite ore is the main source of aluminum. Aluminum is used in automobiles and airplanes (36%), bottling and canning industries (25%), building and electrical (14%) and in other applications (25%).

Asbestos – Asbestos is a class of minerals that can be readily separated into thin, strong fibers that are flexible, heat resistant, and chemically inert. Asbestos minerals are used in fireproof fabrics, yarn, cloth, and paper and paint filler. Asbestos is used to make friction products, asbestos cement pipes and sheets, coatings and compounds, packing and gaskets, roofing and flooring products, paints and caulking, and chemical filters.

Barium – Barium is an element, derived primarily from the mineral barite, and used as a heavy additive in oil-well-drilling mud, paints, rubber, plastic and paper; production of barium chemicals; and glass manufacturing.

Cadmium – Cadmium is used in plating and alloying, pigments, plastics, and batteries. Cadmium is obtained from the ore minerals Sphalerite (Zn,Cd)S and Greenockite (CdS).

Diamond – Industrial diamonds are those that can not be used as gems. Large diamonds are used in tools and drilling bits to cut rock and small stone. Small diamonds, also known as dust or grit, are used for cutting and polishing stone and ceramic products.

Gold – Gold is used in dentistry and medicine, jewelry and arts, medallions and coins, and in ingots. It is also used for scientific and electronic instruments, computer circuitry, as an electrolyte in the electroplating industry, and in many applications for the aerospace industry.

Titanium – Titanium is a metal used mostly in jet engines, airframes, and space and missile applications. In powdered form, titanium is used as a white pigment for paints, paper, plastics, rubber, and other materials.