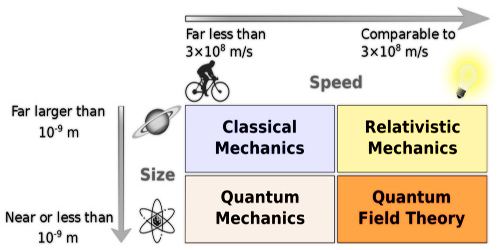 Classical Physics is generally concerned with matter and energy on the normal scale of observation, while much of modern physics is concerned with the behavior of matter and energy under extreme conditions or on a very large or very small scale. For example, atomic and nuclear physics studies matter on the smallest scale at which chemical elements can be identified. The physics of elementary particles is on an even smaller scale since it is concerned with the most basic units of matter; this branch of physics is also known as high-energy physics because of the extremely high energies necessary to produce many types of particles in particle accelerators. On this scale, ordinary, commonsense notions of space, time, matter, and energy are no longer valid.

The two chief theories of modern physics present a different picture of the concepts of space, time, and matter from that presented by classical physics. Classical mechanics approximates nature as continuous, while quantum theory is concerned with the discrete nature of many phenomena at the atomic and subatomic level and with the complementary aspects of particles and waves in the description of such phenomena.

Difference Between Classical and Modern Physics: Classical physics is based on the study of macroparticles (macro means large scale) and modern physics deals with the microparticles (micro means microscopic level).

Here are give some difference between classical and modern physics –

Physics uses mathematics to organize and formulate experimental results. From those results, precise or estimated solutions are obtained, quantitative results from which new predictions can be made and experimentally confirmed or negated. The results from physics experiments are numerical data, with their units of measure and estimates of the errors in the measurements. Technologies based on mathematics, like computation, have made computational physics an active area of research.

Applied physics is a general term for physics research which is intended for a particular use. An applied physics curriculum usually contains a few classes in an applied discipline, like geology or electrical engineering. It usually differs from engineering in that an applied physicist may not be designing something in particular, but rather is using physics or conducting physics research with the aim of developing new technologies or solving a problem. The approach is similar to that of applied mathematics. Applied physicists use physics in scientific research. For instance, people working on accelerator physics might seek to build better particle detectors for research in theoretical physics.

Computer modeling is essential for quantum and relativistic physics. Classic physics is considered the limit of quantum mechanics for a large number of particles. On the other hand, classic mechanics is derived from relativistic mechanics. For example, in many formulations from special relativity, a correction factor (v/c)2 appears, where v is the velocity of the object and c is the speed of light. For velocities much smaller than that of light, one can neglect the terms with c2 and higher that appear. These formulas then reduce to the standard definitions of Newtonian kinetic energy and momentum. This is as it should be, for special relativity must agree with Newtonian mechanics at low velocities. Computer modeling has to be as real as possible. Classical physics would introduce an error as in the superfluidity case. In order to produce reliable models of the world, one cannot use classic physics. It is true that quantum theories consume time and computer resources, and the equations of classical physics could be resorted to provide a quick solution, but such a solution would lack reliability.

Physics is used heavily in engineering. For example, statics, a subfield of mechanics, is used in the building of bridges and other static structures. The understanding and use of acoustics results in sound control and better concert halls; similarly, the use of optics creates better optical devices. An understanding of physics makes for more realistic flight simulators, video games, and movies, and is often critical in forensic investigations.

In a computer model, there is no need to use the speed of the object if classical physics is excluded. Low energy objects would be handled by quantum theory and high energy objects by relativity theory.