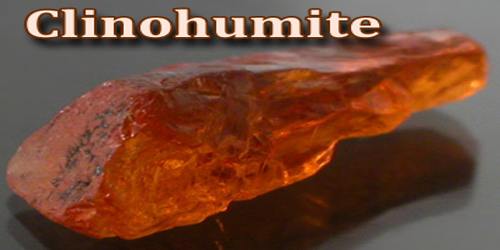 Clinohumite is a monoclinic-prismatic mineral containing fluorine, hydrogen, iron, magnesium, oxygen, and silicon. It is an uncommon member of the humite group, a magnesium silicate according to the chemical formula (Mg,Fe)9(SiO4)4(F,OH)2. The formula can be thought of as four olivine (Mg2SiO4), plus one brucite (Mg(OH)2).

Most commonly found as tiny indistinct grains, large euhedral clinohumite crystals are sought by collectors and occasionally fashioned into bright, yellow-orange gemstones. Only two sources of gem-quality material are known: the Pamir Mountains of Tajikistan, and the Taymyr region of northern Siberia. It is one of two humite group minerals that have been cut into gems, the other being the much more common chondrodite. Clinohumite is a member of the Hymite Group of minerals that includes Chondrodite, Clinohumite, Humite and Norbergite. It is very beautiful and rear gem and is usually very small and included. The best clinohumite has an intense and bright orange color with few inclusions. It was first discovered in 1876 as indistinct grains embedded in limestone on Mount Vesuvius near Naples, Italy. In 1983, the first deposit of gem quality crystals was discovered of Lake Baikal, in the Pamir Mountains, Tajkistan.There are other locations for clinohumite, including Tilly Foster Mine, New York; Fort Defiance, Apache County, Arizoana; Fresno County, California; Luna, New Mexico and Franklin, New Jersey, USA, but these locations do not produce gem quality metarial. Properties and Uses of Clinohumite

Clinohumite is a member of the humite group, and is chemically similar to Humite, with a very slightly modified chemical formula and different crystal form. Though Clinohumite is not a common mineral, it occurs more frequently and in better examples than its namesake Humite. Clinohumite is typically a dark to light brownish or orangy yellow, somewhat resembling the hessonite variety of grossular. Clinohumite’s crystal habit is usually granular, but may also be prismatic; crystals are almost always small. Simple and multiple crystal twinning (on {001}) is common, resulting in a highly variable habit. Clinohumite is brittle with a hardness of 6 and a poor basal cleavage. Its specific gravity is 3.2–3.4, and its fracture is conchoidal to uneven; its streak is white.

Its transparency ranges from transparent to translucent; its luster ranges from a dull vitreous to resinous. Its refractive index (as measured via sodium light, 589.3 nm) is as follows: α 1.631; β 1.638–1.647; γ 1.668;, with a maximum birefringence of 0.028 (biaxial positive). Under shortwave ultraviolet light, some clinohumite may fluoresce an orangy yellow; there is little to no response under longwave UV. Its crystals may be tabular and prismatic, usually as complex crystals with rounded faces. Crystals may also be twinned in a vertical plane. Most frequently in grainy and crude masses.

Clinohumite is of interest to collectors, especially the rare transparent forms which are highly collectible. Gems for collectors are ocassionally cut from transparent stones. The best formation of Clinohumite, in the form of outstanding orange crystals with good transparency, is from Kukh-i-Lal, Pamir Mts, Tajikistan. Sharp crystals and grains of Hydroxylclinohumite of excellent quality come from Sar-e-Sang, Kokcha Valley, Badakhshan Province, Afghanistan. Clinohumite associated with contrasting dark Spinel is found in the Hunza Valley, Gilgit, Pakistan.