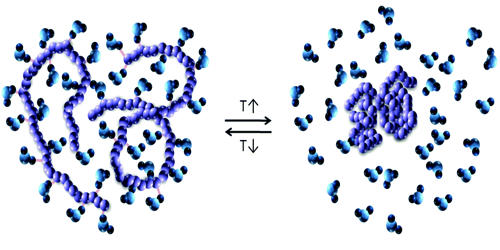 In polymer physics, the coil–globule transition is the collapse of a macromolecule from an expanded coil state through an ideal coil state to a collapsed globule state or vice versa. Polymers adopt extended coil and compact globule states according to the balance between entropy and interaction energies. Upon transfer from strongly denaturing to native conditions, proteins undergo a collapse that either precedes folding or occurs simultaneously with it. This collapse is similar to the well-known coil–globule transition of polymers. It is a hallmark of the physics of polymers in solution.

The coil–globule transition is of importance in biology due to the presence of coil-globule transitions in biological macromolecules such as proteins and DNA. It is also analogous with the swelling behavior of a crosslinked polymer gel and is thus of interest in biomedical engineering for controlled drug delivery. A particularly prominent example of a polymer possessing a coil-globule transition of interest in this area is that of Poly(N-isopropyl acrylamide). Thus, thermosensitive polymers represent essential targets for several applications, e.g., in drug delivery.

In its coil state, the radius of gyration of the macromolecule scales as its chain length to the three-fifths power. When a polymer molecule is transferred from a good solvent to a bad one, it undergoes a collapse from an expanded coil-like conformation to a contracted, globule-like conformation. The transition of a polymer between an extended coil state and compact globule state can be induced by changing thermodynamic force such as temperature to alter the energy/entropy balance. As it passes through the coil–globule transition, it shifts to scaling as chain length to the half-power (at the transition) and finally to the one-third power in the collapsed state. Prominent among such transformations is the coil-globule transition, whereby a polymer can switch from an entropy-dominated coil conformation to a globular one, governed by energy.

Molecular dynamics simulations are used to study the coil-globule transition for a system composed of a bead-spring polymer immersed in an explicitly modeled solvent. The direction of the transition is often specified by the constructions ‘coil-to-globule’ or ‘globule-to-coil’ transition. The transition from the globule to the random-coil structure was observed with well-tempered metadynamics.