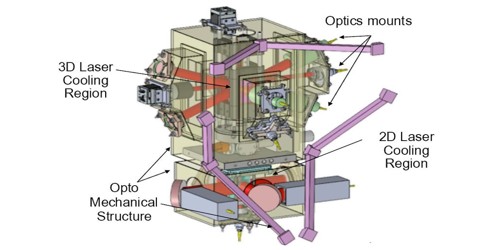 The Cold Atom Laboratory (CAL) is a fundamental physics user facility that will operate on the International Space Station (ISS). CAL is an experimental instrument being developed that was originally scheduled for launch to the International Space Station (ISS) in June 2017. The quest for ever colder temperatures has been a major theme of physics for over a century. It was then delayed until a scheduled launch on a SpaceX CRS-12 rocket in August 2017. It was launched on May 21, 2018. CAL successfully launched to the ISS on May 21, 2018, aboard an Orbital ATK Cygnus spacecraft, atop an Antares rocket, from NASA’s Wallops Flight Facility in Virginia. CAL will produce clouds of ultra-cooled atoms called Bose-Einstein condensates.

The instrument will create extremely cold conditions in the microgravity environment of the ISS leading to the formation of Bose-Einstein Condensates that are a magnitude colder than those that are created in laboratories on Earth. On Earth, freely evolving BEC’s are dragged down by the pull of gravity, and can typically only be observed for a fraction of a second. In a space-based laboratory, up to 10 seconds of interaction times and as low as 1 picokelvin temperatures are achievable, and it could lead to an exploration of unknown quantum mechanical phenomena and test some of the most fundamental laws of physics. These experiments need to be done in zero gravity because gravity can ruin experiments that use Bose-Einstein Condensates. CAL is a multi-user facility and researchers will be able to conduct experiments remotely, with no astronaut assistance, with up to 6.5 hours of experimentation time available each day.

Zero gravity can only be attained for a couple of seconds on earth. In space, experiments can last much longer because gravity is not as big a concern. CAL was designed and built at NASA’s Jet Propulsion Laboratory, on behalf of NASA’s Space Life and Physical Sciences Research and Applications (SLPSRA) Division, in the Human Exploration and Operations Mission Directorate. NASA’s JPL scientists state that the CAL investigation could advance knowledge in the development of extremely sensitive quantum detectors, which could be used for monitoring the gravity of Earth and other planetary bodies, or for building advanced navigation devices. The summer may have been hot, but NASA’s Cold Atom Laboratory (CAL) onboard the International Space Station (ISS) was definitely keeping cool!

The initial mission will have a duration of 12 months with up to five years of extended operation. The CAL is a multiuser facility on the space station that enables the study of ultra-cold quantum gasses in microgravity using laser cooling technology.