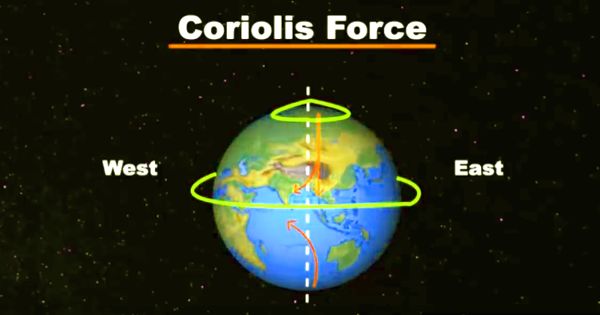 In physics, the Coriolis force is an inertial or fictitious force that acts on objects that are in motion within a frame of reference that rotates with respect to an inertial frame. 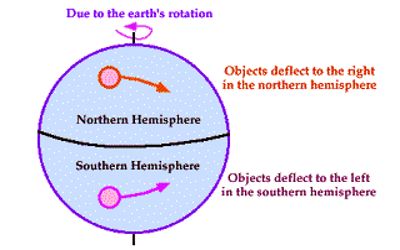 Newton’s laws of motion describe the motion of an object in an inertial (non-accelerating) frame of reference. It is also significant in the earth sciences, especially meteorology, physical geology, and oceanography, in that Earth is a rotating frame of reference, and motions over the surface of Earth are subject to acceleration from the force indicated. When Newton’s laws are transformed into a rotating frame of reference, the Coriolis and centrifugal accelerations appear. When applied to massive objects, the respective forces are proportional to the masses of them.

The centrifugal force acts outwards in the radial direction and is proportional to the distance of the body from the axis of the rotating frame. The Coriolis effect describes the pattern of deflection taken by objects not firmly connected to the ground as they travel long distances around Earth. These additional forces are termed inertial forces, fictitious forces, or pseudo forces. It is responsible for many large-scale weather patterns. By accounting for the rotation by addition of these fictitious forces, Newton’s laws of motion can be applied to a rotating system as though it was an inertial system. Earth completes one rotation per day, so for everyday motions, like throwing a ball or an apple falling from a tree, the Coriolis force is very small compared to other forces and is negligible. They are correction factors which are not required in a non-rotating system. Its effects become noticeable only for motions occurring over large distances and long periods of time.