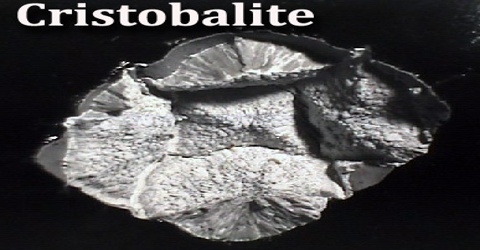 Cristobalite is chemically identical to quartz, with the chemical formula SiO2, but has a different crystal structure. Crystals are always microscopic, and usually form small rounded masses. It is a mineral of volcanic rocks that solidified at a high temperature. Cristobalite occurs as white octahedra or spherulites in acidic volcanic rocks and in converted diatomaceous deposits in the Monterey Formation of the US state of California and similar areas. Cristobalite is stable only above 1470 °C, but can crystallize and persist metastably at lower temperatures. It is named after Cerro San Cristóbal in Pachuca Municipality, Hidalgo, Mexico.

Cristobalite is only metastable at normal surface temperatures; meaning that, if it could, it would slowly convert to the quartz structure. But this is a slow and complicated process taking thousands of years if it happens at all. It is a slow process mostly because the transformation involves the breaking of bonds and the rearrangement of atoms. Atoms of aluminum and sodium in the structure may help the stability of cristobalite as well. Production and Properties of Cristobalite

Cristobalite is common in volcanic rocks and many microscopic crystals are easily seen in a petrographic microscope. However, larger well formed crystals are rarer and good specimens are found in the crevices and cavities (called vesicles) of the host rocks. Cristobalite’s wide spread distribution in certain types of rocks would require an abundance rating of at least common, although good macroscopic crystal specimens are hard to find. Identification of cristobalite is not necessarily easy, but it is so common in volcanic rocks that crystal habit and color are usually sufficient.

Cristobalite is available as a powder; it is manufactured by mixing quartz with the right fluxes/catalysts and calcined to the necessary temperature (1100C+), then cooling it quickly.  It is stable only above 1470 °C, but can crystallize and persist metastably at lower temperatures. The persistence of cristobalite outside of its thermodynamic stability range occurs because the transition from cristobalite to quartz or tridymite is “reconstructive”, requiring the breaking up and reforming of the silica framework.