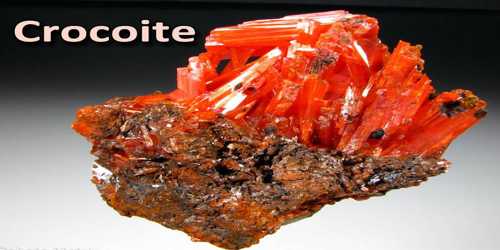 Crocoite, originally called “Red Lead Ore,” has several other historical names. Its current recognized name was established by German mineralogist August Breithaupt as “Krokoit”, which has been anglicized to its present name of Crocoite. Its name is derived from the Greek word for saffron, alluding to the color and habit of saffron threads which very much resemble this mineral. Crocoite specimens are generally fragile, and care should be taken when handling.

Occurrences and Properties of Crocoite

Crocoite occurs as long, well-developed, prismatic crystals; the most beautiful specimens are from Dundas, Tasmania. Other localities include the Urals, Brazil, and the southwestern United States. Crocoite has a bright hyacinth-red to orange colour and an adamantine to vitreous lustre that dulls on exposure to sunlight. It was first found in Russia and later in other European localities, but only sparingly and in typically small crystals. The Australian discovery on the island of Tasmania took this mineral to a whole new level when large, brilliant, well-formed crystals larger and more abundant than any other localities were found. The original crystals from this discovery yielded phenomenal crystals and aggregates, although excellent material is still coming out of these mines as they are now being mined for specimen production. Crocoite is commonly found as large, well-developed prismatic adamatine crystals, although in many cases are poorly terminated. Crystals are of a bright hyacinth-red color, translucent, and have an adamantine to vitreous lustre. On exposure to UV light some of the translucency and brilliancy is lost. The streak is orange-yellow; Mohs hardness is 2.5–3; and the specific gravity is 6.0.

Its crystals are elongated and prismatic, and almost always striated vertically. Large and single crystals are uncommon; this mineral is most often as reticulated aggregates, acicular groupings, elongated needles, grainy, encrusting, and as disorganized groupings of small prismatic crystals. Crystals are sometimes partially hollow. Crocoite was at one time a main ore of chromium, but it is now too rare to be used. Crystals are highly sought after by mineral collectors because of their attractive color.