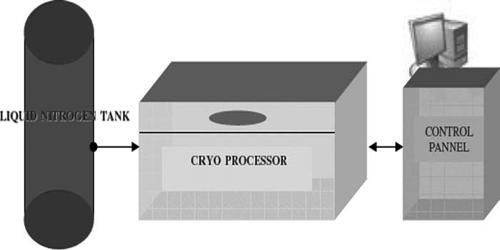 A Cryogenic processor is a unit designed to reach ultra-low temperatures (usually around −300 °F / −150 °C) at a slow rate in order to prevent thermal shock to the components being treated. The first commercial unit was developed by Ed Busch in the late 1960s. The development of programmable microprocessor controls allowed the machines to follow temperature profiles that greatly increased the effectiveness of the process. Some manufacturers make cryoprocessors with home computers to define the temperature profile. These cryogenic processors come in standard sizes and can be modified to meet customer specifications. The heating and quenching steps are combined in specific ways to produce any of several outcomes, such as annealing, hardening, or tempering.

Before programmable controls were added to control cryogenic processors, the “treatment” process of an object was previously done manually by immersing the object in liquid nitrogen. Nitrofreeze offers cryogenic treatment equipment and cryogenic processors with post-temper capabilities. We also have another line of cryogenic processors that have a high temperature (+1120F) tempering included. This normally caused a thermal shock to occur within an object, resulting in cracks to the structure. Modern cryogenic processors measure changes in temperature and adjust the input of liquid nitrogen accordingly to ensure that only small fractional changes in temperature occur over a long period of time. These models are made of stainless steel and built for maximum utilization. All new cryogenic processing systems come with a warranty. Their temperature measurements and adjustments are condensed into “profiles” that are used to repeat the process in a certain way when treating for similarly grouped objects. The term is usually encountered in the context of physics, materials science, and medicine. A scientist who studies cryogenics is called a cryogenicist.