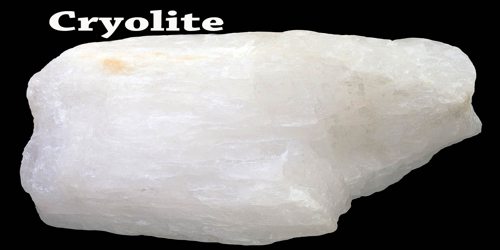 Cryolite is a white or colourless mineral consisting of a fluoride of sodium and aluminium in monoclinic crystalline form: used in the production of aluminium, glass, and enamel. It was first described in 1798 by Danish veterinarian and physician Peder Christian Abildgaard (1740-1801); it was obtained from a deposit of it in Ivigtut and nearby Arsuk Fjord, Southwest Greenland. The name is derived from the Greek language words κρυος (cryos) = ice, and λιθος (lithos) = stone. Its individual crystals, which are rare, are usually prismatic. Most often roughly crystallized with multiple pseudocubic or pseudo-octahedral faces appearing similar to cleavages. It is also massive and grainy.

Cryolite’s economic importance was as a flux for the production of aluminum, but its significance became entirely diminished once it was able to be synthesized. This made the mining operation no longer necessary and mining and production of Cryolite was entirely stopped.

Occurrences, Productions and Properties of Cryolite

Cryolite occurs as glassy, colorless, and white-reddish to gray-black prismatic monoclinic crystals. It has a Mohs hardness of 2.5 to 3 and a specific gravity of about 2.95 to 3.0. It is translucent to transparent with a very low refractive index of about 1.34, which is very close to that of water; thus if immersed in water, cryolite becomes essentially invisible.

Cryolite has also been reported at Pikes Peak, Colorado; Mont Saint-Hilaire, Quebec; and at Miass, Russia. It is also known in small quantities in Brazil, the Czech Republic, Namibia, Norway, Ukraine, and several American states. It occurs in a large deposit at Ivigtut, Greenland, and in small amounts in Spain, Colorado, U.S., and elsewhere. The most important mine was at Ivittutt (Ivigtut), Arsuk, Greenland, where Cryolite was extensively mined for its use as a flux in the production of aluminum. This was the world’s only mine exclusively for Cryolite, and has been its only major producer. Upon the synthesizing of Cryolite, mining at this location was no longer economical, and the mine permanently closed in 1987. The town was abandoned shortly thereafter. Cryolite has also been mined in St. Peters Dome, Cheyenne District, El Paso Co., Colorado; and small amounts have come from the Morefield Mine, Winterham, Amelia Co., Virginia. In Canada, small Cryolite crystals have come from Quebec at the Poudrette Quarry, Mont St. Hilaire; and the Francon Quarry, Montreal.

Pure cryolite itself melts at 1012 °C (1285 K), and it can dissolve the aluminium oxides sufficiently well to allow easy extraction of the aluminium by electrolysis. Substantial energy is still needed for both heating the materials and the electrolysis, but it is much more energy-efficient than melting the oxides themselves.

Cryolite is usually lightly colored, and it commonly associated with contrasting dark brownish yellow Siderite. The Siderite may also be in microcrystals covering the Cryolite, making it appear yellow or brown. Cryolite has a very low refractive index, similar to water, and therefor if transparent pieces put in water, they will blend right in and be hard to distinguish in the water. Cryolite is used as a solvent for bauxite in the electrolytic production of aluminum and has various other metallurgical applications, and it is used in the glass and enamel industries, in bonded abrasives as filler, and in the manufacture of insecticides. A large amount of synthetic cryolite is made from fluorite.

It is used as an insecticide and a pesticide. It is also used to give fireworks a yellow color. Molten cryolite is used as a solvent for aluminium oxide (Al2O3) in the Hall–Héroult process, used in the refining of aluminum.