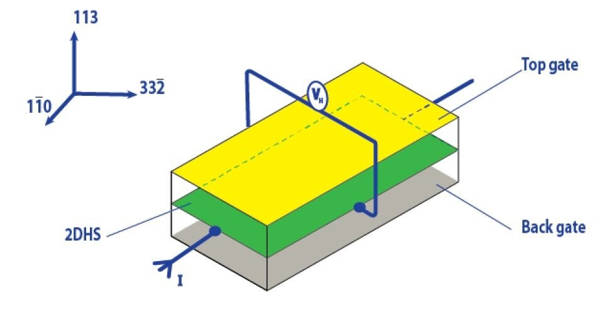 This discovery represents a significant step forward in the search for topological effects in non-equilibrium systems. The team at UNSW, led by Dimi Culcer, discovered an unusual Hall effect driven by an in-plane magnetic field in semiconductor hole systems that can only be attributed to the Berry curvature.

Enhanced topological effects would make low-energy topological electronics feasible for large-scale, room-temperature operation, and they were recently included in the IEEE roadmap for future electronics.

A FLEET theoretical study out this week has found a ‘smoking gun’ in the long search for the topological magnetic monopole referred to as the Berry curvature.

Quantized responses, such as the quantum Hall and quantum spin-Hall effects, provide a clear fingerprint of topology, but have only been observed in one-dimensional (1D) systems and are intimately related to the presence of edge states.

Plenty of theoretical literature exists in regular conductors, meaning 2D and 3D systems, predicting topological contributions to e.g. the anomalous Hall effect, but these have never been observed unambiguously in a transport measurement.

This is due to two major factors: I Spin-up and spin-down electrons typically make opposing contributions, which nearly cancel out; (ii) whatever remains is overwhelmed by the disorder.

“Remarkably, all disorder contributions vanish: we are not aware of any other multi-dimensional system in which this is true,” says lead author James Cullen, a UNSW Ph.D. student. “Because its experimental measurement is accessible to any cutting-edge laboratory worldwide, we anticipate strong interest from experimentalists.”

The research team was looking for a mathematical trace known as ‘Berry curvature,’ which can be understood by recalling the concept of parallel transport, which appears frequently in geometry and general relativity.

“Think of a vector as an arrow placed somewhere on the surface of a solid object,” Dimi explains. “Now we move the arrow around, making sure it always points at the same angle to the surface – this is similar to a human walking along the Earth’s surface. We eventually return the arrow to its starting point after it has circled around, and we discover that it now points in a different direction — it has magically rotated through some angle. The curvature of the surface determines the size of this angle.”

In quantum mechanics, wave functions replace vectors, but the dynamics can be described using the same picture, and the curvature is known as the Berry curvature.

The famous Berry phase, named after the mathematical physicist Prof Sir Michael Berry, who formulated the problem in the 1980s, replaces the angle of rotation. Later, Qian Niu of UT Austin demonstrated, building on the work of Nobel laureate David Thouless, that the Berry curvature behaves like the coveted magnetic monopole – but not in real space, but in momentum space, which is the space most condensed-matter physicists think in.

Because an electron is accelerated and its momentum changes when an electric field is applied, the Berry curvature drives topological effects in out-of-equilibrium systems. When this happens, its wave function slowly changes, similar to how the arrow rotates in parallel transport, and a transverse (Hall) current is generated as a result of this gradual rotation. The Hall current does not dissipate energy, according to the Onsager relations, which are fundamental to non-equilibrium physics. The quantum anomalous Hall effect, a quantum effect critical to the function of topological materials, is an extreme case in which edge currents can flow with effectively zero electrical resistance.