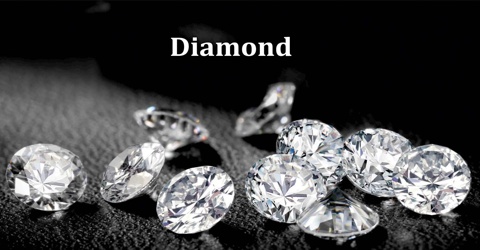 Diamond is a form of pure carbon that occurs naturally as a clear, cubic crystal and is the hardest of all known minerals. It is less stable than graphite, but the conversion rate from diamond to graphite is negligible at standard conditions. It often occurs as octahedrons with rounded edges and curved surfaces. The secret to diamond’s superior strength is found on the molecular level. Carbon atoms possess four valence electrons available for bonding. In diamond crystals, each of those four free electrons forms a covalent bond with a valence electron of a neighboring carbon atom. Since all of the free electrons are bonded uniformly, it creates a rigid tetrahedral lattice that gives the coveted mineral its prized properties.

Diamond forms under conditions of extreme temperature and pressure and is most commonly found in volcanic breccias and in alluvial deposits. Poorly formed diamonds are used in abrasives and in industrial cutting tools. Most natural diamonds are formed at high temperature and pressure at depths of 140 to 190 kilometers (87 to 118 mi) in the Earth’s mantle. Carbon-containing minerals provide the carbon source, and the growth occurs over periods from 1 billion to 3.3 billion years (25% to 75% of the age of the Earth).

Diamond is the hardest naturally occurring material on Earth and is much rarer than gold. About 175,000 tons of gold have been mined in all of human history, while only around 500 tons of diamonds have been mined in the same amount of time. It is invariably ‘the biggest and the best’. Diamond is a transparent crystal of tetrahedrally bonded carbon atoms in a covalent network lattice that crystallizes into the diamond lattice which is a variation of the face centered cubic structure. The chemical bonds that hold the carbon atoms in diamonds together are weaker than those in graphite. In diamonds, the bonds form an inflexible three-dimensional lattice, whereas in graphite, the atoms are tightly bonded into sheets, which can slide easily over one another, making the overall structure weaker. A diamond ranks a 10 on the Mohs Hardness Scale. The Mohs Scale is used to determine the hardness of solids, especially minerals. It is named after the German mineralogist Friedrich Mohs.

Types of Cuts and Shapes of Diamond

There are a number of diamond cuts available in the market, here are the ones you are most likely to see when shopping for jewelry: The ideal diamond is completely colorless. These are the most expensive types of diamond. Though most diamonds appear colorless, they actually have slight tones of yellow or brown. The Gemological Institute of America (GIA), the authority in diamond certification, grades color alphabetically from D (totally colorless) to Z (heavily tinted). The most popular colors and diamond types are a combination of pink, blue, brown, yellow, orange, green and red. Yellow is the most common naturally occurring color in a diamond.

Diamonds so prepared are called synthetic or artificial diamonds. Synthetic diamonds are widely used in industry in cutting and grinding tools. The chemical properties of synthetic and natural diamonds are the same. The important of diamonds are as follows.