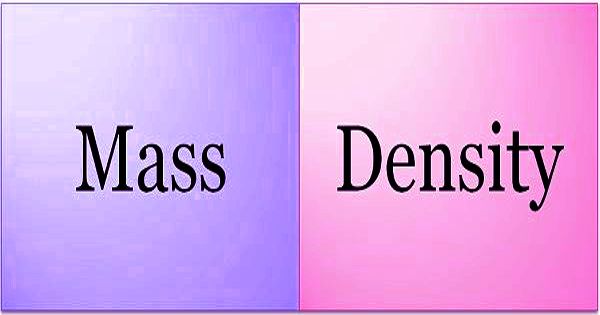 Difference between Mass and Density

Density and mass provide physical dimensions of a given object but are completely different in application. Mass is the quantity of matter while volume is the measure of space occupied by the object. The ratio of these two aspects of the matter is known as density. While mass measures the total amount of stuff, density is how many individual particles of stuff are within a small space within the object. The measurement unit of mass is a kilogram, whereas the density is measured in kilogram per cubic meter.

Mass is a measure of how much matter there is within an object, typically given in grams. Density is the amount of mass in an object per a certain amount of volume.

Difference between Mass and Density

The unit of measurement of mass is a kilogram, whereas the standard unit of density as per International Standard is kilogram per cubic metre. The SI units that represent the mass of any object are kilograms and grams whereas those of density is kg/m3 or gm/cm3.