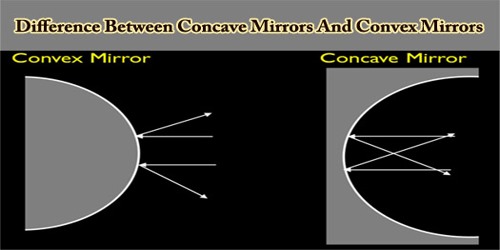 Convex mirror refers to a curved mirror in which the reflective surface bulges out towards the source of light. This bulging surface reflects light outwards. Moreover, people will notice that these mirrors form erect and virtual images. Moreover, they are diminished in nature. A convex mirror is also known as a diverging mirror as this mirror diverges light when they strike on its reflecting surface. Virtual, erect, and diminished images are always formed with convex mirrors, irrespective of the distance between the object and the mirror. Apart from other applications, the convex mirror is mostly used as a rearview mirror in vehicles.

These mirrors are used as rearview mirrors in cars or motorbikes, ATMs, hallways of schools, hospitals, stores, etc., to help the people view, what’s happening behind them.

The reflecting surface of a concave mirror bent inward to focus, i.e. away from the light source. When the light is bounded by the curve up to a particular area, they form an image. It can reflect images in two ways:

Hence, it is also known as a converging mirror. When the concave mirror is placed very close to the object, a magnified and virtual image is obtained. But if we increase the distance between the object and the mirror then the size of the image reduces and a real image is formed. So the image formed by the concave mirror can be small or large and it can also be real or virtual.

For instance, the headlight of an automobile is a concave mirror. Similarly, the reflecting telescopes, eyeglasses, torch lights, cameras, lasers, and more all examples of these mirrors. They are also used by dentists, or as shaving mirrors.

The difference between convex and concave mirror is explained hereunder: