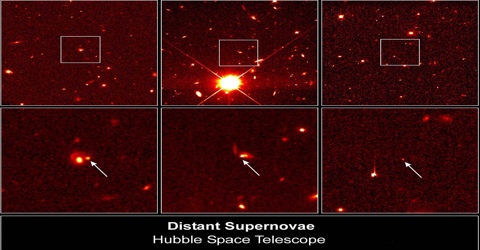 The Hubble Space Telescope images pinpoint three distant supernovae, which exploded and died billions of years ago. Scientists are using these faraway light sources to estimate if the universe was expanding at a faster rate long ago and is now slowing down. Since the discovery of the expansion of the Universe by American astronomer Edwin Hubble in the 1920’s, by measurement of galaxy velocities, astronomers have tried to learn how this expansion changes with time. Until now, most scientists have been considering two possibilities: the expansion rate is slowing down and will ultimately either come to a halt – whereafter the Universe would start to contract, or it will continue to expand forever. However, new studies by two independent research teams, based on observations of exploding stars (supernovae) by ESO astronomers with astronomical telescopes at the La Silla Observatory as well as those of their colleagues at other institutions, appear to show that the expansion of the Universe is accelerating.

Distances Supernovae are Larger than Expected

The new observations show that, compared to their nearby twins, distant supernovae appear too dim, even for a Universe which has been freely coasting (i.e. with no change of the expansion velocity) for the last several billion years (corresponding to redshifts of about 0.5). The only reasonable interpretation of these data implies that the measured distances are larger than what they would be in a “non-braking” Universe. This means that the distances to the supernovae must have increased over and above what they would have been if the rate of expansion did not change with time. This is only possible by the effect of additional acceleration, i.e., the rate of expansion of the Universe increases with time. The acceleration comes from a repulsive force. This concept was introduced by Albert Einstein, as the cosmological constant.

Supernovae are exploding stars. They represent the very final stages of evolution for some stars. Supernovae, as celestial events, are huge releases of tremendous energy, as the star ceases to exist, with about 1020 times as much energy produced in the supernova explosion as our Sun releases every second. Our Sun, fortunately, will not end its life as a supernova. Currently, supernovae are only seen in galaxies other than the Milky Way. We know that supernovae have occurred in our Galaxy in the past, since both Tycho Brahe and his protege, Johannes Kepler, discovered bright supernovae occurring in the Milky Way in 1572 and 1604, respectively. And, the Chinese, and others, have records of a “guest star” occurring in 1054 in the present constellation Taurus. Today, we see remnants of all three supernovae, which appear as expanding clouds of gas, where each was originally discovered. However, no supernova has been seen in our Galaxy since Kepler’s.

A star can go supernova in one of two ways: The first type of supernova happens in binary star systems. Binary stars are two stars that orbit the same point. One of the stars, a carbon-oxygen white dwarf, steals matter from its companion star. Eventually, the white dwarf accumulates too much matter. Having too much matter causes the star to explode, resulting in a supernova.

The second type of supernova occurs at the end of a single star’s lifetime. As the star runs out of nuclear fuel, some of its mass flows into its core. Eventually, the core is so heavy that it cannot withstand its own gravitational force. The core collapses, which results in the giant explosion of a supernova. The sun is a single star, but it does not have enough mass to become a supernova.

There are several important implications from this new result. The corresponding, deduced age of the Universe, now about 14,000 – 15,000 million years, no longer conflicts with that of the oldest known stellar objects in globular clusters. Moreover, the spatial geometry of the Universe appears to be “flat” – this is a strong confirmation of inflation a short phase of very rapid expansion in the very early Universe.

There is a profound philosophical repositioning of humankind implied by this result. This follows the first step which was taken by Copernicus who in the mid-sixteenth century dislodged us from the centre of the Universe. Not only does the material from which the visible galaxies, stars, the Earth and its inhabitants are made comprise only a small fration of the gravitating mass in the Universe. There is now a new component, the “dark energy” which joins the “dark matter” in shaping the large-scale geometric and dynamical structure.

Clearly, more observations are needed to further support the findings described here. They will soon be forthcoming, especially from new and large telescopes like the ESO Very Large Telescope (VLT) that has recently delivered its first, impressive results.

But already now, on the verge of the new millennium, we are having a first glimpse of extremely exciting and fundamental aspects in the continuing human quest for the deep truths of nature.