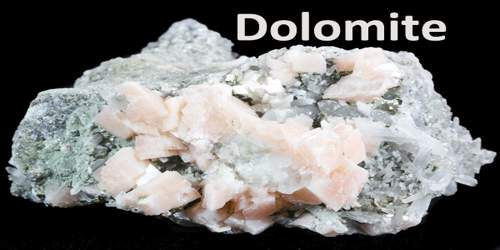 Dolomite is a gray, pink, or white rhombohedral mineral. Dolomite occurs in curved saddlelike crystals with a pearly to glassy luster. It is a common rock-forming mineral. Its chemical formula: CaMg(CO3)2. It is the primary component of the sedimentary rock known as dolostone and the metamorphic rock known as dolomitic marble. Limestone that contains some dolomite is known as dolomitic limestone. The term is also used for a sedimentary carbonate rock composed mostly of the mineral dolomite. An alternative name sometimes used for the dolomitic rock type is dolostone. The mineral dolomite was first described by Carl Linnaeus in 1768. In 1791, it was described as a rock by the French naturalist and geologist Déodat Gratet de Dolomieu (1750–1801), first in buildings of the old city of Rome, and later as samples collected in the mountains now known as the Dolomite Alps of northern Italy. Nicolas-Théodore de Saussure first named the mineral (after Dolomieu) in March 1792.

Dolomite is also a common mineral in hydrothermal veins. There it is often associated with barite, fluorite, pyrite, chalcopyrite, galena, or sphalerite. In these veins it often occurs as rhombohedral crystals which sometimes have curved faces. Occurrences, Formations and Properties of Dolomite

A large dolomite body extends southwest of Lake Ontario in Ontario, Canada, and crosses into the New York border at the Niagara Falls area. It runs several hundred miles through central New York. Several dolomite and limestone quarries in this area have produced nice Dolomite crystals. Although dolomite does not form on the surface of the earth at the present time, massive layers of dolomite can be found in ancient rocks. Dolomite is one of the few sedimentary rocks that undergoes a significant mineralogical change after it is deposited. Dolomite rocks are originally deposited as calcite/aragonite-rich limestone, but during a process called diagenesis, the calcite and/or aragonite is transformed into dolomite. Magnesium-rich ground water containing a significant amount of salt is thought to be essential to dolomite formation. Thus, warm, tropical marine environments are considered the best sources of dolomite formation.

Dolomite has three directions of perfect cleavage. This may not be evident when the dolomite is fine-grained. It has a Mohs hardness of 3 1/2 to 4 and is sometimes found in rhombohedral crystals with curved faces. Dolomite produces a very weak reaction to cold, dilute hydrochloric acid. It is very similar to the mineral calcite. Calcite is composed of calcium carbonate (CaCO3), while dolomite is a calcium magnesium carbonate (CaMg(CO3)2). These two minerals are one of the most common pairs to present a mineral identification challenge in the field.

The most common use for dolostone is in the construction industry. It is crushed and sized for use as a road base material, an aggregate in concrete and asphalt, railroad ballast, rip-rap, or fill. It is also calcined in the production of cement and cut into blocks of specific size known as “dimension stone.” Dolomite is used to make magnesia, which has important medicinal applications. It is important in the chemical industry for the preparation of magnesium salts. It is also used in soil mixtures to lower the acid levels of the soil.

Dolomite specimens from the the Midwest localities in the Tri-State region of Oklahoma, Missouri, and Kansas are popular collector items. The clear transparent specimens from Spain and the hot-pink variety from the Congo make rare and unusual specimens that are highly sought after by collectors. It is also used as the substrate in marine (saltwater) aquariums to help buffer changes in pH of the water.

Calcined dolomite is also used as a catalyst for destruction of tar in the gasification of biomass at high temperature.