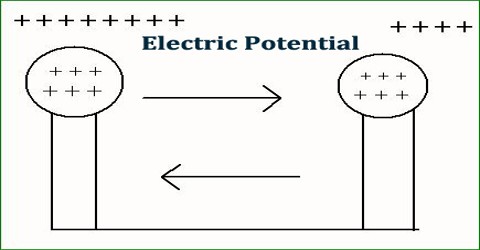 Electric Potential is a scalar quantity denoted by V, equal to the electric potential energy of any charged particle at any location (measured in joules) divided by the charge of that particle (measured in coulombs). By dividing out the charge on the particle a remainder is obtained that is a property of the electric field itself. This value can be calculated in either a static (time-invariant) or a dynamic (varying with time) electric field at a specific time in units of joules per coulomb, or volts (V). The electric potential at infinity is assumed to be zero. Chemical energy is transformed into electric potential energy within the internal circuit (i.e., the battery). Once at the high potential terminal, a positive test charge will then move through the external circuit and do work upon the light bulb or the motor or the heater coils, transforming its electric potential energy into useful forms for which the circuit was designed. The positive test charge returns to the negative terminal at a low energy and low potential, ready to repeat the cycle (or should we say circuit) all over again. In an electrical circuit, electric potential between two points is defined as the amount of work done by an external agent in moving a unit charge from one point to another.

Q = the quantity of charge in coulombs

The potential difference is measured by an instrument called voltmeter. The two terminals of a voltmeter are always connected parallel across the points whose potential is to be measured.