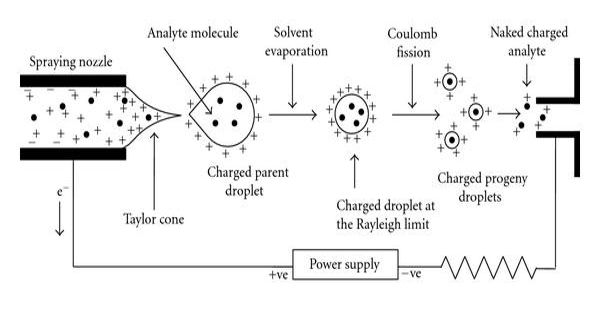 Electrospray ionization (ESI) generates intact gas-phase ions from analytes in the solution for mass spectrometric investigations. It is a technique used in mass spectrometry to produce ions using an electrospray in which a high voltage is applied to a liquid to create an aerosol. It is a soft ionization technique that is typically used to determine the molecular weights of proteins, peptides, and other biological macromolecules. It is especially useful in producing ions from macromolecules because it overcomes the propensity of these molecules to fragment when ionized. ESI is one of the most popular atmospheric pressure ionization processes employed in clinical and research laboratories due to its ease of use.

Electrospray ionization (ESI) is a soft ionization technique that is typically used to determine the molecular weights of proteins, peptides, and other biological macromolecules.

Electrospray ionization is an ionization process by which analyte molecules or ions present originally in solution are transferred to the gas phase through either solvent or ion evaporation. ESI can proceed via different mechanisms. ESI is different from other ionization processes (e.g. matrix-assisted laser desorption/ionization (MALDI)) since it may produce multiple-charged ions, effectively extending the mass range of the analyzer to accommodate the kDa-MDa orders of the magnitude observed in proteins and their associated polypeptide fragments. 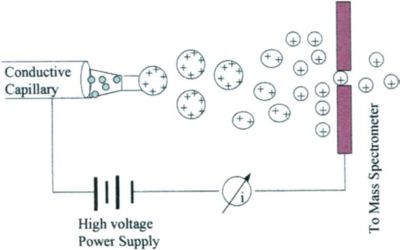 The Process of Electrospray Ionization – The ESI process can be roughly divided into three stages: droplet formation, desolvation, and gas phase ion formation.

ESI is a so-called ‘soft ionization’ technique since there is very little fragmentation. ESI sources are now routinely used to couple liquid chromatographic techniques to mass spectrometric detectors. This can be advantageous in the sense that the molecular ion is almost always observed, however very little structural information can be gained from the simple mass spectrum obtained. Electrospray is produced by applying a strong electric field to liquid passing through a capillary tube with a weak flux. This disadvantage can be overcome by coupling ESI with tandem mass spectrometry (ESI-MS/MS). Another important advantage of ESI is that solution-phase information can be retained into the gas-phase.