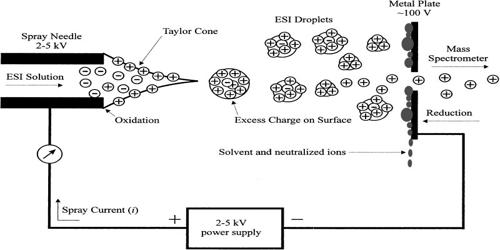 Electrospray is an electrohydrodynamic technique similar to electrospinning. Electrospray ionization (ESI) is a technique used in mass spectrometry to produce ions using an electrospray in which a high voltage is applied to a liquid to create an aerosol. ESI requires sample introduction in liquid form and thus is convenient for the analysis of oligonucleotides. It is especially useful in producing ions from macromolecules because it overcomes the propensity of these molecules to fragment when ionized. While ESI is widely used, it is subject to matrix effects, particularly ion suppression, which must be taken into consideration during method development. ESI is different from other ionization processes since it may produce multiple-charged ions, effectively extending the mass range of the analyzer to accommodate the kDa-MDa orders of the magnitude observed in proteins and their associated polypeptide fragments. ESI generates gaseous ions from polar compounds in liquid solvents passing through a capillary tip on which a strong electric field is applied

ESI source is another important soft ionization method used for biomolecule analysis. ESI can proceed via different mechanisms. Low molecular weight analytes follow the ion evaporation model (IEM), whereas the charged residue model (CRM) applies to large globular species. The electrospray ionization technique was first reported by Masamichi Yamashita and John Fenn in 1984. The development of electrospray ionization for the analysis of biological macromolecules was rewarded with the attribution of the Nobel Prize in Chemistry to John Bennett Fenn in 2002. One of the original instruments used by Dr. Fenn is on display at the Science History Institute in Philadelphia, Pennsylvania.