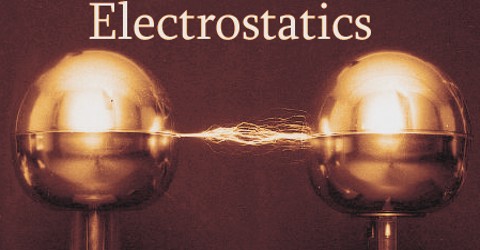 Electrostatics is the study of electromagnetic phenomena that occur when there are no moving charges—i.e., after a static equilibrium has been established and it is a branch of physics. Its other name is ‘static electricity’. A Greek philosopher ‘Thales’ in 600 BC conducted an experiment. He observed that when amber was rubbed with some woolen cloth it gets charged and immediately started attracting small pieces of paper, corks, dust particles, etc. Amber is a yellowish brown translucent substance found along some of the famous seacoasts and is also used in jewelry items. Greek name of ‘Amber’ is ‘Electrum’. It was originated from the words electric charge, electric field, electric force, electricity and electron. Electrostatics is also called as ‘frictional electricity’. When two non insulating bodies are rubbed with each other then the charges at rest are generated due to the presence of friction in them. When a glass rod is rubbed with a piece of silk cloth then it gets charged. In other words we can say that rod is ‘Charged’ or ‘Electrified’. Some examples are: Similar is the case of Comb. It also gets charged or electrified when it is passed through dry hair. A paper sheet also gets charged when it is passed through the machine in the printing press.

Electrostatics involves the buildup of charge on the surface of objects due to contact with other surfaces. Although charge exchange happens whenever any two surfaces contact and separate, the effects of charge exchange are usually only noticed when at least one of the surfaces has a high resistance to electrical flow. This is because the charges that transfer are trapped there for a time long enough for their effects to be observed. These charges then remain on the object until they either bleed off to ground or are quickly neutralized by a discharge: e.g., the familiar phenomenon of a static ‘shock’ is caused by the neutralization of charge built up in the body from contact with insulated surfaces. Static electricity is a familiar electric phenomenon in which charged particles are transferred from one body to another. For example, if two objects are rubbed together, especially if the objects are insulators and the surrounding air is dry, the objects acquire equal and opposite charges and an attractive force develops between them. The object that loses electrons becomes positively charged, and the other becomes negatively charged. The force is simply the attraction between charges of opposite sign. The properties of this force were described above; they are incorporated in the mathematical relationship known as Coulomb’s law.