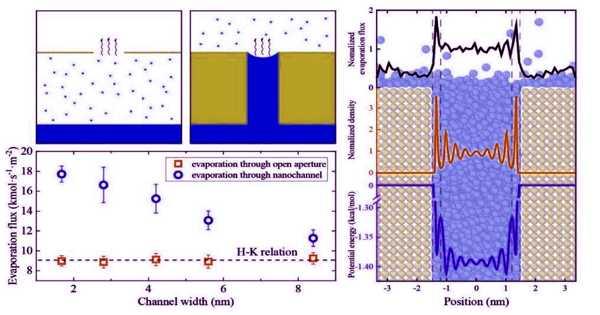 The dynamic behavior of water, ions, gases, and other media confined in nanochannels is the primary focus of confined mass transfer. Constrained mass transfer has recently piqued the interest of scientists due to its widespread application in energy, the environment, health, and other fields. However, at the nanoscale, the interface effect is dominant, and the confined liquid has a different structure and transport characteristics than at the macroscale. As a result, the traditional continuum mechanics model is no longer applicable, and no global theoretical model at the nanoscale exists.

In response, a research team led by Prof. WANG Fengchao of the Department of Modern Mechanics at the University of Science and Technology of China (USTC) of the Chinese Academy of Sciences (CAS) revealed the underlying mechanisms of the enhanced evaporation flux through nanochannels and developed a quantitative model of the evaporation-driven liquid flow through nanochannels. This work was published in the journal Physics of Fluids.

Scientists show increasing interest in confined mass transfer due to its wide application in energy, environment, health and other fields. However, the interface effect is dominant at the nanoscale, and the confined liquid has different structure and transport characteristics from the macro scale.

The previous work contributes to explaining the ultra-high flux of covalent organic frameworks (COFs) films in a study proposing a strategy for fabricating membrane distillation membranes composed of vertically aligned channels with a hydrophilicity gradient. This work, done in collaboration with USTC and the Beijing Institute of Technology, was published in Nature Materials.

Due to its applications in mass and heat transfer, as well as energy harvesting, evaporation-driven liquid flow through nanochannels has received a lot of attention in recent years. A more comprehensive understanding is still expected to reveal the underlying mechanisms and quantify the transport characteristics of this phenomenon.

The study of fluids under nanoscale confinement, where smallscale effects dictate fluid physics and continuum assumptions are no longer fully valid, is known as nanofluidics. Fluid interaction with boundaries becomes more pronounced at this scale due to large surface-area-to-volume ratios, and both short-range steric/hydration forces and long-range van der Waals forces and electrostatic forces govern fluid behavior.

The increased evaporation near the solid-liquid interface and the reduced vapor diffusion length in the engineered COF layer work together to increase the COF membrane’s water flux. Furthermore, a pure water layer gap exists between the water–vapor interface and the salt–vapor interface, preventing ions from making direct contact with the pore walls or the evaporation interface. Because the charged surface reduces the adjacent salt concentration and thus reduces salt crystallization, the engineered COF membranes exhibit anti-wetting behavior.

Water evaporation at the nanoscale is a common occurrence in nature and is critical in a wide range of technical applications. We use a nonequilibrium molecular dynamics simulation to investigate the characteristics of nano-thin water film evaporation on a silicon nitride nanopore membrane, taking into account the effects of pore size and pore chemistry. Pore chemistry is the most important factor in regulating evaporation flux.

Due to its applications in mass and heat transfer, as well as energy harvesting, evaporation-driven liquid flow through nanochannels has received a lot of attention in recent years. A more comprehensive understanding is still expected to reveal the underlying mechanisms and quantify the transport characteristics of this phenomenon.

These studies demonstrate superior water desalination and purification performance based on improved evaporation through nanochannels when compared to traditional technology, promoting the development of gradient membranes for molecular sieving.