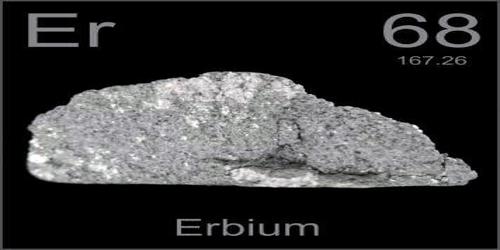 Erbium is a soft malleable silvery-white element of the lanthanide series of metals: used in special alloys, room-temperature lasers, and as a pigment. It is a lanthanide, a rare earth element, originally found in the gadolinite mine in Ytterby in Sweden, from which it got its name. Its symbol: Er; atomic no: 68; atomic wt: 167.26; valency: 3; relative density: 9.006; melting pt: 1529°C; boiling pt: 2868°C. In 1843, at Stockholm, Carl Mosander obtained two new metal oxides from yttrium, which had been known since 1794. One of these was erbium oxide, which was pink and the other was terbium oxide, which was yellow. While erbium was one of the first lanthanoid elements to be discovered, the picture is clouded because early samples of this element must have contained other rare-earths. We know this because In1878 Jean-Charles Galissard de Marignac, working at the University of Geneva, extracted another element from erbium and called it ytterbium.

A sample of pure erbium metal was not produced until 1934, when Wilhelm Klemm and Heinrich Bommer achieved it by heating purified erbium chloride with potassium.

Today, the rare earth elements can be separated easily, and they can be bought at a reasonable cost. Two common uses of erbium today are in lasers and special kinds of optical fibers. Optical fibers are glass-like materials used to carry telephone messages. The correct chemical name for the rare earth elements is the lanthanides, which comes from the first element in the sixth row of the periodic table, lanthanum.

Occurrences and Properties of Erbium

Erbium classified as an element in the Lanthanide series as one of the “Rare Earth Elements” which can located in Group 3 elements of the Periodic Table and in the 6th and 7th periods. The Rare Earth Elements are divided into the Lanthanide and Actinide series. The elements in the Lanthanide series closely resemble lanthanum, and one another, in their chemical and physical properties. Their compounds are used as catalysts in the production of petroleum and synthetic products. Nearly 75% of all the elements in the Periodic Table are classified as metals which are detailed in the List of Metals. The principal commercial sources of erbium are from the minerals xenotime and euxenite, and most recently, the ion adsorption clays of southern China. The concentration of erbium in the Earth crust is about 2.8 mg/kg and in the sea water 0.9 ng/L. This concentration is enough to make erbium about 45th in elemental abundance in the Earth’s crust. Like other rare earths, this element is never found as a free element in nature but is found bound in monazite sand ores.

Erbium metal has a bright, shiny surface, much like metallic silver. It is soft and malleable. Malleable means capable of being hammered into thin sheets. It has a melting point of 1,522°C (2,772°F) and a boiling point of about C (4,500°F). Its density is 9.16 grams per cubic centimeter. It is fairly stable in air. It does not react with oxygen as quickly as most other lanthanides. Erbium compounds tend to be pink or red. They are sometimes used to color glass and ceramics. The rare earth ions are then selectively washed out by suitable complexing agent. Erbium metal is obtained from its oxide or salts by heating with calcium at 1450 °C under argon atmosphere.

Erbium finds little use as a metal because it slowly tarnishes in air and is attacked by water. Erbium oxide is occasionally used in infrared absorbing glass, for example safety glasses for welders and metal workers. When erbium is added to glass it gives the glass a pink tinge. It is used to give colour to some sunglasses and imitation gems. It is sometimes alloyed with vanadium metal. An alloy is made by melting and mixing two or more metals. The mixture has properties different than those of the individual metals. A vanadium-erbium alloy is easier to work with than pure vanadium metal. The most important uses of erbium are in lasers and optical fibers. A laser is a device for making very intense light of one specific color. The light is intensified and focused into a narrow beam that can cut through metal. Lasers now have many practical applications.