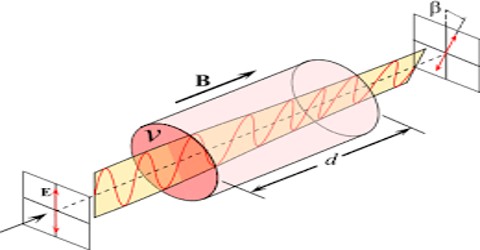 Discovered by Michael Faraday in 1845, the Faraday Effect was the first experimental evidence that light and electromagnetism are related. The Faraday Effect, also called Faraday rotation, occurs when the direction of polarization of an electromagnetic wave is changed when the wave passes through a piece of transparent material permeated by a magnetic field. In the Faraday effect or rotation, however, the direction of the optical rotation, as viewed when looking into the beam, is reversed when the light traverses the substance opposite to the magnetic field direction; that is, the rotation can be reversed by either changing the field direction or the light direction. Reflected light, having passed twice through the medium, has its plane of polarization rotated by twice the angle observed for single transmission. The Faraday Effect should not be confused with Faraday’s law, which describes the induction of current in a wire loop by a changing magnetic field inside the loop.

The Faraday effect or rotation experiment appealed to TeachSpin as a “real” physics experiment to dramatically “show off” the capabilities of the Signal Processor/Lock-In Amplifier (SPLIA1-A). Faraday rotation seemed ideal because, in the presence of a magnetic field reasonably obtained with a laboratory power supply and a solenoid, there is only a small rotation of the plane of polarization.

Applications of Faraday Effect (or Rotation)

The Faraday effect or rotation has a practical application in optical isolators. An optical isolator is a device that allows light to go through in one direction but severely attenuates reflected light propagating in the opposite direction. Modern ultra-high field permanent magnets and special paramagnetic glasses have made these devices quite small, but not cheap (about $2K). The configuration of the components is essentially the same as in FR1-A. The polarizers are set at 45°. The combined effect of the special glass and the large magnetic field rotates the polarization plane of the light 45° on each passage. A simple sketch will show how this works as an optical isolator.

Optical isolators have important applications in telecommunications preventing reflected signals on fiber optic cables from producing unwanted signals. Isolators are important when lasers are used because reflected light can cause havoc with the operation of the laser itself. The causes of the Faraday effect or rotation lie in the detailed physics of the transmission of electromagnetic radiation through material objects; the Faraday effect does not appear when electromagnetic rays pass through a magnetic field in a vacuum. In brief, a linearly polarized ray can be thought of as the superposition or simultaneous presence of two rays circularly polarized in opposite directions. In a medium with nonzero Verdet coefficient, these two circularly polarized rays experience different delays. When they emerge from the slab of material they recombine into a single, linearly-polarized ray whose direction of polarization has been rotated through some angle θ.

Uses of Faraday Effect (or Rotation)

The Faraday effect or rotation is being investigated for use in optical computing. By changing the value of a magnetic field rapidly, the polarization of a laser beam can be rapidly modulated. This can be used to impress information on the laser beam, and that information can be detected by a receiving device. For detection, the polarized light could be passed through a polarizing filter, which would block the light more or less depending on its rapidly-changing angle of polarization. A similar effect occurs when a pair of Polaroid sunglasses blocks glare from the sky or from reflective surfaces. A relatively simple brightness detector could then record the data signal. Such devices have been proposed as ultra-high-speed data links connecting computing elements.

In organic materials, Faraday rotation is typically small, with a Verdet constant in the visible wavelength region on the order of a few hundred degrees per Tesla per meter, decreasing proportional to λ-2 in this region. While the Verdet constant of organic materials does increase around electronic transitions in the molecule, the associated light absorption makes most organic materials bad candidates for applications. There are however also isolated reports of large Faraday rotation in organic liquid crystals without associated absorption. The linear polarized light that is seen to rotate in the Faraday effect or rotation can be seen as consisting of the superposition of a right- and a left- circularly polarized beam this superposition principle is fundamental in many branches of physics. In circularly polarized light the direction of the electric field rotates at the frequency of the light, either clockwise or counter-clockwise. In a material, this electric field causes a force on the charged particles comprising the material, because of their low mass, the electrons are most heavily affected. The motion thus effected will be circular, and circularly moving charges will create their own (magnetic) field in addition to the external magnetic field.