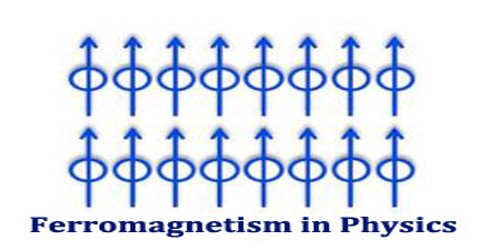 Ferromagnetism, physical phenomenon in which certain electrically uncharged materials strongly attract others. Two materials found in nature, lodestone or magnetite, an oxide of iron, Fe3O4 and iron, have the ability to acquire such attractive powers, and they are often called natural ferromagnets. An everyday example of ferromagnetism is a refrigerator magnet used to hold notes on a refrigerator door. The attraction between a magnet and ferromagnetic material is “the quality of magnetism first apparent to the ancient world, and to us today”.

Ferromagnetism is very important in industry and modern technology, and is the basis for many electrical and electromechanical devices such as electromagnets, electric motors, generators, transformers, and magnetic storage such as tape recorders, and hard disks. However, different classes of spontaneous magnetization have been identified when there is more than one magnetic ion per primitive cell of the material, leading to a stricter definition of “ferromagnetism” that is often used to distinguish it from ferrimagnetism. In particular,

A material is “ferromagnetic” in this narrower sense only if all of its magnetic ions add a positive contribution to the net magnetization.

If some of the magnetic ions subtract from the net magnetization, if they are partially anti-aligned, then the material is “ferrimagnetic”.

If the moments of the aligned and anti-aligned ions balance completely so as to have zero net magnetization, despite the magnetic ordering, then it is an antiferromagnet. Here is a list of ferromagnetic (including ferrimagnetic) materials from the “Kittel”. Besides the chemical formula, the Curie temperature TC and the magnetic moment mm of the molecules in units of the Bohr magneton mB is listed. The long range order which creates magnetic domains in ferromagnetic materials arises from a quantum mechanical interaction at the atomic level. This interaction is remarkable in that it locks the magnetic moments of neighboring atoms into a rigid parallel order over a large number of atoms in spite of the thermal agitation which tends to randomize any atomic-level order. Sizes of domains range from a 0.1 mm to a few mm. When an external magnetic field is applied, the domains already aligned in the direction of this field grow at the expense of their neighbors. If all the spins were aligned in a piece of iron, the field would be about 2.1 Tesla. A magnetic field of about 1 T can be produced in annealed iron with an external field of about 0.0002 T, a multiplication of the external field by a factor of 5000! For a given ferromagnetic material the long range order abruptly disappears at a certain temperature which is called the Curie temperature for the material. The Curie temperature of iron is about 1043 K.

The ideal material for making permanent magnets should possess high retentivity and high coercivity so that the magnetisation lasts for a longer time. Examples of such substances are steel and alnico, an alloy of Al, Ni and Co. Core of the Transformer –

A material used for making transformer core and choke is subjected to cyclic changes very rapidly. Also, the material must have a large value of magnetic induction. Therefore, soft iron that has thin and tall hysteresis loop is preferred. Some alloys with low hysteresis loss are: radio-metals, pern-alloy and mumetal.