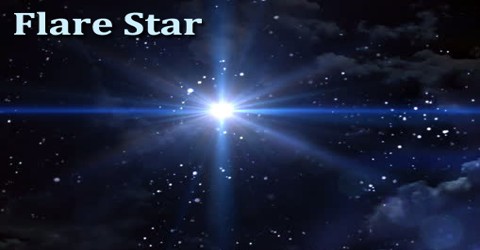 Flare Star is a variable star that sporadically displays sudden increases in brightness, sometimes becoming six times as bright in a matter of only a few minutes, after which it gradually fades back to its normal brightness. The cause of this phenomenon is thought to be an event similar to a solar flare, but on a more intense scale with a much higher emission of x-rays. It is also called Uv Ceti Star. Flare stars are sometimes called UV Ceti stars, from a prototype star in the constellation Cetus. Proxima Centauri, the closest star to the Sun, is a flare star. All known flare stars are red dwarfs; flares in intrinsically brighter stars are not presently detectable. In UV Ceti and a few others, radio flares have been observed often corresponding to the optical outbursts.

Most flare stars are dim red dwarfs, although recent research indicates that less massive brown dwarfs might also be capable of flaring. The more massive RS Canum Venaticorum variables (RS CVn) are also known to flare, but it is understood that these flares are induced by a companion star in a binary system which causes the magnetic field to become tangled. Additionally, nine stars similar to the Sun had also been seen to undergo flare events prior to the flood of superflare data from the Kepler observatory. It has been proposed that the mechanism for this is similar to that of the RS CVn variables in that the flares are being induced by a companion, namely an unseen Jupiter-like planet in a close orbit. Most of the nearby flare stars are found in a spherical volume of radius 25 parsecs around the sun.  Flare stars are intrinsically faint, but have been found to distances of 1,000 light years from Earth. This due to selection effects during observations of flares and a preference of identifying nearby stars in general by their largs proper motions. The most active flare stars have strong emission lines and are therefore noticeable in spectral surveys. Fifteen years ago almost all knoen stars later than dM5e had emission lines and were considered prospective flare stars.

The colours and flux distributions of nearby flare stars are those of red, cool objects. The B-V colour index ranges from unity to more than two, and numerous atomic lines in the spectra.

The most powerful stellar flare detected, as of December 2005, may have come from the active binary II Peg. Its observation by Swift suggested the presence of hard X-rays in the well-established Neupert effect as seen in solar flares.

The Sun’s nearest stellar neighbor Proxima Centauri is a flare star that undergoes occasional increases in brightness because of magnetic activity. The star’s magnetic field is created by convection throughout the stellar body, and the resulting flare activity generates a total X-ray emission similar to that produced by the Sun.

The mean magnetic field has a strength of about 2.2 kG (0.2 T), but this varies significantly on time scales as short as six hours. By comparison, the magnetic field of the Sun averages 1 G (100 µT), although it can rise as high as 3 kG (0.3 T) in active sunspot regions. Barnard’s Star, the second nearest star system. Given its age, at 7–12 billion years of age, Barnard’s Star is considerably older than the Sun. It was long assumed to be quiescent in terms of stellar activity. However, in 1998, astronomers observed an intense stellar flare, surprisingly showing that Barnard’s Star is a flare star.

The more massive member of the binary star 2MASS J1835, an M6.5 star, has strong X-ray activity indicative of a flare star, although it has never been directly observed to flare.