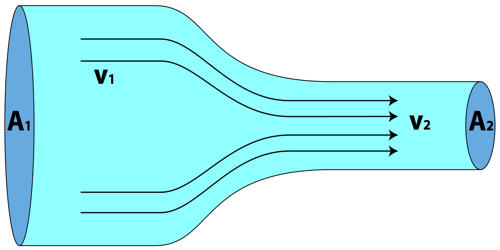 In physics and engineering, fluid dynamics is a subdiscipline of fluid mechanics that describes the flow of fluids—liquids and gases. It is the branch of fluid mechanics dealing with the properties of fluids in motion. It deals with the study or by describing the motion of Fluids also considering the Forces causing the motion. It has several subdisciplines, including aerodynamics and hydrodynamics. Dynamic is the branch of mechanics, in which we study the various loads and its effects simultaneously and when the study is focused on fluid it is known as fluid dynamics.

Fluid dynamics have a wide range of applications, including calculating forces and moments on aircraft, determining the mass flow rate of petroleum through pipelines, predicting weather patterns, understanding nebulae in interstellar space, and modeling fission weapon detonation. It is the study of the movement of fluids, including their interactions as two fluids come into contact with each other. In this context, the term “fluid” refers to either liquid or gases.

Fluid dynamics provide methods for studying the evolution of stars, ocean currents, weather patterns, plate tectonics, and even blood circulation. Fluid dynamics is concerned with the movement of fluids(liquid and gas). Dynamics is a sub-part of mechanics. So fluid dynamics is a study of fluid and how forces affect them when fluid is in motion.

Fluid dynamics offers a systematic structure—which underlies these practical disciplines—that embraces empirical and semi-empirical laws derived from flow measurement and used to solve practical problems. The solution to a fluid dynamics problem typically involves the calculation of various properties of the fluid, such as flow velocity, pressure, density, and temperature, as functions of space and time.

The fluid concepts that apply in fluid statics also come into play when studying fluid that is in motion. Before the twentieth century, hydrodynamics was synonymous with fluid dynamics. This is still reflected in the names of some fluid dynamics topics, like magnetohydrodynamics and hydrodynamic stability, both of which can also be applied to gases. In fluid dynamics applications, data from wind tunnel experiments are routinely used to study the behavior of fourth-order velocity structure functions for nearly isotropic turbulence.