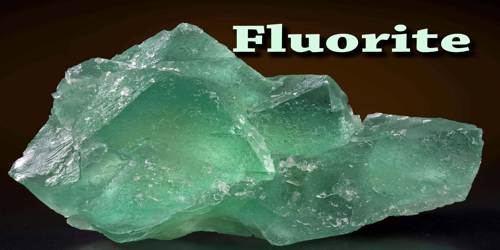 Fluorite (CaF2) is a transparent to translucent mineral occurring in many colors, especially yellow and purple, and usually in cube-shaped crystals with octahedral cleavage. It is also called fluorspar. It is found in sedimentary rocks and in ore deposits within igneous rocks. It is often fluorescent in ultraviolet light. It crystallizes in isometric cubic habit, although octahedral and more complex isometric forms are not uncommon. Mohs scale of mineral hardness, based on scratch Hardness comparison, defines value 4 as Fluorite. The word fluorite is derived from the Latin verb fluere, meaning to flow. The mineral is used as a flux in iron smelting to decrease the viscosity of slags. The term flux comes from the Latin adjective fluxus, meaning flowing, loose, slack.

Pure Fluorite is colorless; the color variations are caused by various impurities. Some colors are deeply colored, and are especially pretty in large well-formed crystals, which Fluorite often forms. Sometimes coloring is caused by hydrocarbons, which can be removed from a specimen by heating. Some dealers may apply oil treatment upon amateur Fluorite specimens to enhance luster.

It is a very common rock-forming mineral found in many parts of the world. In the mining industry, fluorite is often called “fluorspar.” It is used in a wide variety of chemical, metallurgical, and ceramic processes. Specimens with exceptional diaphaneity and color are cut into gems or used to make ornamental objects.

Occurrences and Properties of Fluorite

Fluorite occurs most commonly as a glassy, many-hued vein mineral and is often associated with lead and silver ores; it also occurs in cavities, in sedimentary rocks, in pegmatites, and in hot-spring areas. It is usually quite pure, but as much as 20 percent yttrium or cerium may replace calcium. China and Mexico are the world’s major producers of flourite; the mineral is also widespread in Russia, Brazil, and Spain. The world reserves of fluorite are estimated at 230 million tonnes (Mt) with the largest deposits being in South Africa (about 41 Mt), Mexico (32 Mt) and China (24 Mt). China is leading the world production with about 3 Mt annually (in 2010), followed by Mexico (1.0 Mt), Mongolia (0.45 Mt), Russia (0.22 Mt), South Africa (0.13 Mt), Spain (0.12 Mt) and Namibia (0.11 Mt). Bright blue Fluorite crystals are known from several areas in France. Three particular important localities are Le Burg (Le Burc) and Mont-Roc, both in Tarn, and Le Beix, in Puy-de-Dome. Pink octahedrons, highly valued by collectors, were found in the Alps near the Argentiere Glacier, Mont Blanc, Chamonix, France; and at Göscheneralp, Uri, Switzerland. Fine crystals are also found in Spain in Caravia, Asturias, especially in the Berbes, La Collada, and Villabona areas. In Germany, fine Fluorite has come from the Erzgebirge in Saxony at Frohnau and the Freiberg District.

Its crystals may also be a combination of octahedra and cubes, and dodecahedral growths may also be present, forming complex and interesting crystals. Cleavage marks are present on most crystals. Cleavage fragments from large crystals are also prevalent; in octahedra, the cleavage fragments are flat, triangular shaped pieces, and cubic cleavage fragments are flat, and three dimensional rectangles. Crystals frequently form penetration twins, where one cube is intergrown in another (“fluorite twins”). Also occurs as clusters of intergrown cubes, grainy, botryoidal, as spherical balls, and massive. Fluorite is the only common mineral that has four directions of perfect cleavage, often breaking into pieces with the shape of an octahedron. It is also the mineral used for a hardness of four in the Mohs Hardness Scale. Finally, it has a specific gravity of 3.2, which is detectably higher than most other minerals. It comes in a wide range of colors and has consequently been dubbed “the most colorful mineral in the world”. Every color of the rainbow in various shades are represented by fluorite samples, along with white, black, and clear crystals. The most common colors are purple, blue, green, yellow, or colorless. Less common are pink, red, white, brown, and black. Color zoning or banding is commonly present. The color of the fluorite is determined by factors including impurities, exposure to radiation, and the absence or voids of the color centers.

Fluorite has a wide variety of uses. The primary uses are in the metallurgical, ceramics, and chemical industries; however, optical, lapidary, and other uses are also important. Fluorspar, the name used for fluorite when it is sold as a bulk material or in processed form, is sold in three different grades (acid, ceramic, and metallurgical). Fluorite is also used as a flux in the manufacture of steel and other metals to eliminate impurities. There is a great demand for Fluorite in the optics field, and to meet it synthetic crystals are grown to produce special lenses. It is used in the production of certain glass and enamel. Because of its low index of refraction and low dispersion, clear colourless fluorite of optical quality is used for apochromatic lenses. At one time blue john, a variety from Derbyshire, England, was widely used in ornamental vases and other objects.