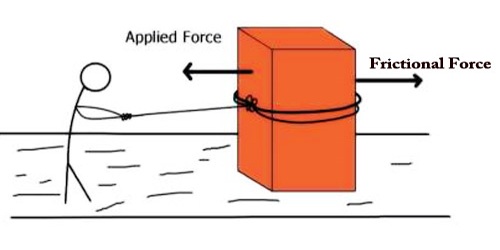 When an object is moving, the friction is proportional and perpendicular to the normal force (N). Friction is independent of the area of contact as long as there is an area of contact. Friction is the force resisting the relative motion of solid surfaces, fluid layers, and material elements sliding against each other. There are several types of friction:

Frictional force refers to the force generated by two surfaces that contacts and slide against each other. A few factors affecting the frictional force:

Friction is a component of the science of tribology. It is desirable and important in supplying traction to facilitate motion on land. Most land vehicles rely on friction for acceleration, deceleration, and changing direction. Sudden reductions in traction can cause loss of control and accidents.

Friction is not itself a fundamental force. Dry friction arises from a combination of inter-surface adhesion, surface roughness, surface deformation, and surface contamination. The complexity of these interactions makes the calculation of friction from first principles impractical and necessitates the use of empirical methods for analysis and the development of theory. Friction is a non-conservative force – work done against friction is path-dependent. In the presence of friction, some kinetic energy is always transformed to thermal energy, so mechanical energy is not conserved.

Calculating the Force of Friction –

The maximum amount of friction force that a surface can apply upon an object can be easily calculated with the use of the given formula:

Here we have provided methodical steps to follow while calculating the force of friction.

Find the Normal Force – The normal force is the support force exerted upon an object that is in contact with another stable object. The normal force can be simply described in most cases by the following formula:

In this formula, m describes the mass of the object, and g stands for the acceleration due to gravity. In case of an inclined surface, the strength of the normal surface is reduced the more the surface is inclined, hence the formula becomes:

θ represents the angle the surface is inclined to.

In a simple calculation, you would calculate the normal force of a 2-kg block of wood sitting on a surface as:

Calculating Frictional Force: As discussed, the formula for frictional force is given by F = μN. As an example, let us consider the block of wood that weighs 2-kg resting on a table to be pushed from rest. In this case, we consider the static friction co-efficient. 0.5 is the static co-efficient of wood. With the given details, we can calculate the normal force as

Now that we have the values of normal force and static friction co-efficient, we can calculate the frictional force as follows:

According to the law of conservation of energy, no energy is destroyed due to friction, though it may be lost to the system of concern. Energy is transformed from other forms into thermal energy. A sliding hockey puck comes to rest because friction converts its kinetic energy into heat which raises the thermal energy of the puck and the ice surface. Since heat quickly dissipates, many early philosophers, including Aristotle, wrongly concluded that moving objects lose energy without a driving force.