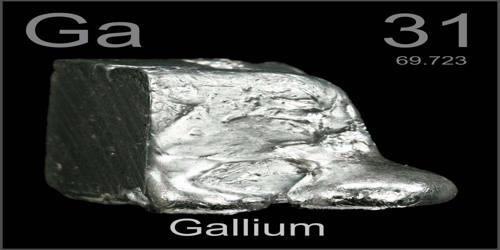 Gallium is a rare, silvery metallic element that is found as a trace element in coal, in bauxite, and in several minerals. It is liquid near room temperature and expands when it solidifies. Gallium does not occur as a free element in nature, but as gallium(III) compounds in trace amounts in zinc ores and in bauxite. Elemental gallium is a soft, silvery blue metal at standard temperature and pressure, a brittle solid at low temperatures, and a liquid at temperatures greater than 29.76 °C (85.57 °F) (slightly above room temperature). The melting point of gallium is used as a temperature reference point. The alloy galinstan (68.5% gallium, 21.5% indium, and 10% tin) has an even lower melting point of −19 °C (−2 °F), well below the freezing point of water. Gallium was was first discovered by the French chemist Paul-Émile Lecoq de Boisbaudran in 1875, who had been studying the spectra of the chemical elements for 15 years (spectra are the lines produced when chemical elements are heated), according to Chemistry Explained. Since each element produces its own distinctive set of lines, or spectra, this method was a reliable way to identify elements.

Gallium has no known natural role in biology. Gallium(III) behaves in a similar manner to ferric salts in biological systems, and has been used in some medical applications, including pharmaceuticals and radiopharmaceuticals. Gallium is used in thermometers as a non-toxic and environmentally friendly alternative to mercury and can withstand higher temperatures than mercury.

Occurrences, production and Properties of Gallium

In nature, gallium is never found as a free element and cannot be found in a substantial amount in any minerals. Rather, it exists in trace amounts in various compounds, including zinc ores and bauxite. By weight, gallium makes up about 0.0019 percent of Earth’s crust, according to PeriodicTable. It is easily obtained by smelting, however, and most commercial gallium is extracted as a byproduct of aluminum and zinc production, according to Chemicool. The largest producers of gallium are Australia, Russia, France, and Germany. The name (Gallium) originates from the Latin word Gallia meaning France also gallus, meaning “rooster”after the French chemist Paul-Emile Lecoq de Boisbaudan known as ‘Lecoq’. Galliums elements can be classified based on their physical states (States of Matter) e.g. gas, solid or liquid. This element is a solid. Gallium classified in the ‘Other Metals’ section which can be located in groups 13, 14, and 15 of the Periodic Table. All of these elements are solid, have a relatively high density and are opaque. Nearly 75% of all the elements in the Periodic Table are classified as metals which are detailed in the List of Metals.

The melting point of gallium, at 302.9146 K (29.7646 °C, 85.5763 °F), is just above room temperature, and is approximately the same as the average summer daytime temperatures in Earth’s mid-latitudes. This melting point (mp) is one of the formal temperature reference points in the International Temperature Scale of 1990 (ITS-90) established by the International Bureau of Weights and Measures (BIPM). The triple point of gallium, 302.9166 K (29.7666 °C, 85.5799 °F), is used by the US National Institute of Standards and Technology (NIST) in preference to the melting point. On the periodic table of the elements, gallium is grouped in the Boron family (group 13), which includes the semi-metal boron (B) and the metals aluminium (Al), gallium, indium (In) and thallium (Tl), according to Chemistry LibreTexts. All five of these elements have three electrons in their outer energy level.

Gallium is a soft, silvery-white metal, similar to aluminium. Gallium arsenide has a similar structure to silicon and is a useful silicon substitute for the electronics industry. It is an important component of many semiconductors. It is also used in red LEDs (light emitting diodes) because of its ability to convert electricity to light. Solar panels on the Mars Exploration Rover contained gallium arsenide. Gallium nitride is also a semiconductor. It has particular properties that make it very versatile. It has important uses in Blu-ray technology, mobile phones, blue and green LEDs and pressure sensors for touch switches. Gallium bonds easily with most metals and is commonly used to make low-melting alloys. It is one of four metals (including mercury, rubidium and caesium) that are liquid at or near room temperature. Of these four metals, gallium is the least reactive and least toxic, making it the most safe and environmentally-friendly choice for high temperature thermometers, barometers, heat transfer systems and cooling and heating devices.

Gallium is also used in some pharmaceuticals and radiopharmaceuticals. For example, the radioactive isotope Ga-67 is used as a nuclear medicine test to look for inflammation, infection or cancer in the body.