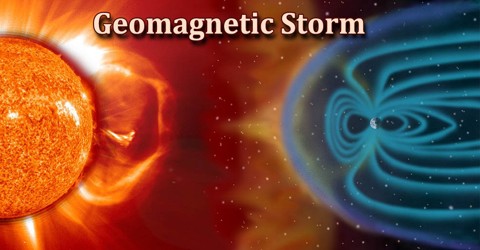 Geomagnetic storms are associated with solar flares and coronal mass ejections (CME). The geomagnetic storm which happened last week had some effect on communications in China but obviously it could have been a lot worse. The recent geomagnetic storm was due to a Class X2.2 solar flare but in 1859 a real doozy happened, so powerful it knocked out telegraph wires and caused auroras so powerful at the poles people claimed they could read using the light. Some geomagnetic storms are recurrent and happen every 27 days, corresponding to the Sun’s rotation period but others occur more frequently near solar maximum and have both the interplanetary shock wave and the CME that drives it.

A geomagnetic storm has three phases: initial, main and recovery. The initial phase is characterized by Dst (or its one-minute component SYM-H) increasing by 20 to 50 nT in tens of minutes. The initial phase is also referred to as a storm sudden commencement (SSC). However, not all geomagnetic storms have an initial phase and not all sudden increases in Dst or SYM-H are followed by a geomagnetic storm. The main phase of a geomagnetic storm is defined by Dst decreasing to less than −50 nT. The selection of −50 nT to define a storm is somewhat arbitrary. The minimum value during a storm will be between -50 and approximately -600 nT. The duration of the main phase is typically 2–8 hours. The recovery phase is when Dst changes from its minimum value to its quiet time value. The recovery phase may last as short as 8 hours or as long as 7 days. The size of a geomagnetic storm is classified as moderate (−50 nT > minimum of Dst > −100 nT), intense (−100 nT > minimum Dst > −250 nT) or super-storm (minimum of Dst < −250 nT) A geomagnetic storm is basically an ionospheric response to storm-induced changes in the neutral atmosphere. These changes, namely changes in composition and winds, are primarily a consequence of a strong Joule heating of the (auroral) thermosphere by storm-related electric currents. At lower heights, such a neutral atmosphere effect becomes less important, mainly due to shorter electron lifetime, which increases the role of ionization and photochemistry processes. At the base of the F1 layer (hsim 160-170 km) the storm effect becomes very weak, sometimes being absent. Farther down, the most pronounced feature is the filling in of the valley between the E and the F regions, which is caused predominantly by particle precipitation. At E -region maximum and below, the nitric oxide concentration increases due to enhanced production by precipitating particles, and the temperature increases as well. There is a slight decrease of critical frequency foE at middle latitudes, even though below and above the E -layer maximum, the electron density increases. In the high-latitude ionosphere a significant enhancement of the electron concentration is observed.

Farther down, in the lower ionosphere, a large increase of electron density, particularly at night, is observed at auroral and higher middle latitudes as a consequence of a very large increase of energetic particle precipitation. In the neutral lower thermosphere and mesosphere we observe some effects of enhanced particle precipitation, but these effects weaken with decreasing altitude. They become insignificant in the upper stratosphere and absent in the middle stratosphere. In the troposphere and partly in the lower stratosphere, the effect of geomagnetic storms reappears but as an effect of different morphology and origin, which is not caused by energetic particle precipitation. The most promising mechanism at these altitudes seems to be at present the Tinsley’s hypothesis of “electrofreezing,” based on the geomagnetic storm modulation of the cosmic ray flux with subsequent modification of global electric circuit and intracloud electric and nucleation microprocesses.

The effects of a geomagnetic storm are generally strongest in the auroral zone, their amplitude weakens toward middle latitudes, some of them disappear at low latitudes, but some of them reappear or strengthen near the geomagnetic equator, namely effects in the F region.