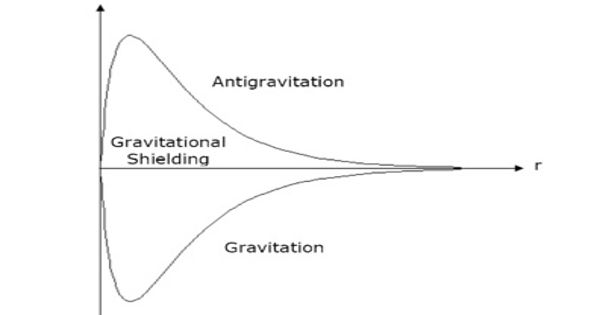 The concept of gravity shielding is a common concept in science fiction literature, especially for space travel.

The general theory of relativity enables us to calculate gravitational shielding and absorption. Experimental evidence to date indicates that no such effect exists. These effects are analogous to the shielding of electromagnetic fields with the exception that in lowest order quadrupoles rather than dipoles are involved. Gravitational shielding is considered to be a violation of the equivalence principle and therefore inconsistent with both Newtonian theory and general relativity. Quasistatic shielding effects occur in the tides, and for some models, the shielding effect is several percent of the applied field. The dynamic shielding is much too small to observe at this time.

A gravitational field is the field of force surrounding a body of finite mass in which another body would experience an attractive force that is proportional to the product of the masses and inversely proportional to the square of the distance between them. The concept of gravity shielding is a common concept in science fiction literature, especially for space travel. One of the first and best-known examples is the fictional gravity shielding substance “Cavorite” that appears in H. G. Wells’s classic 1901 novel The First Men in the Moon. Wells was promptly criticized for using it by Jules Verne. Consider Newton’s second law. It states that the total external force acting on an object is equal to the product of the mass and acceleration. The mass that appears here is a measure of inertia. It is called the inertial mass. The greater the inertial mass is the lesser will be the tendency to change the original velocity.