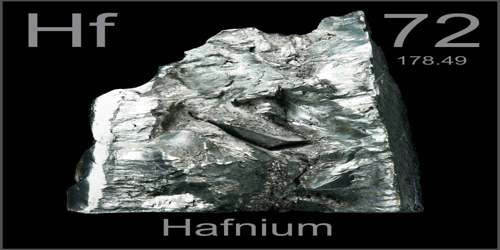 Hafnium is a bright, silvery metallic element that occurs in zirconium ores, with symbol Hf. Because hafnium absorbs neutrons better than any other metal and is resistant to corrosion, it is used to control nuclear reactions. Its atomic number 72; atomic weight 178.49; melting point 2,220°C; boiling point 5,400°C; specific gravity 13.3; valence 4. Hafnium ores are rare, but two are known: hafnon and alvite. Industrial production of hafnium metal is not much more than 50 tonnes a year. Known reserves are not recorded, but can be estimated from those of zirconium. In 1911, Georges Urbain reported the discovery of the missing element below zirconium in the periodic table, but he was wrong and the search continued. It was finally discovered by George Charles de Hevesy and Dirk Coster at the University of Copenhagen in 1923. It was found in a zirconium mineral, a Norwegian zircon, but it had proved very difficult to separate it from zirconium and this explained why hafnium remained undiscovered for so long.

Other zirconium minerals were now examined by Hevesy, and some were found to contain as much as five per cent of hafnium. It meant the atomic weight of zirconium was wrong and hafnium-free material had to be produced in order for this to be determined. The first pure sample of hafnium itself was made in 1925 by decomposing hafnium tetra-iodide over a hot tungsten wire.

Hafnium’s large neutron capture cross-section makes it a good material for neutron absorption in control rods in nuclear power plants, but at the same time requires that it be removed from the neutron-transparent corrosion-resistant zirconium alloys used in nuclear reactors.

Occurrences, Production and Properties of Hafnium

Hafnium is estimated to make up about 5.8 ppm of the Earth’s upper crust by mass. It does not exist as a free element on Earth, but is found combined in solid solution with zirconium in natural zirconium compounds such as zircon, ZrSiO4, which usually has about 1–4% of the Zr replaced by Hf. Rarely, the Hf/Zr ratio increases during crystallization to give the isostructural mineral hafnon (Hf,Zr)SiO4, with atomic Hf > Zr. An old (obsolete) name for a variety of zircon containing unusually high Hf content is alvite. Most zirconium ores contain around 5% hafnium. The metal can be prepared by reducing hafnium tetrachloride with sodium or magnesium. The production of hafnium-free zirconium is the main source for hafnium. Hafnium resists corrosion due to formation of a tough, impenetrable oxide film on its surface.

Its elements can be classified based on their physical states (States of Matter) e.g. gas, solid or liquid. This element is a solid. Hafnium is classified as a “Transition Metal” which are located in Groups 3 – 12 of the Periodic Table. Elements classified as Transition Metals are generally described as ductile, malleable, and able to conduct electricity and heat. Hafnium is chemically similar to zirconium. Both transition metals have similar electronic configurations, and their ionic radii (Zr4+, 0.74 Å, and Hf4+, 0.75 Å) and atomic radii (zirconium, 1.45 Å, and hafnium, 1.44 Å) are nearly identical because of the influence of the lanthanoid contraction. In fact, the chemical behaviour of these two elements is more similar than for any other pair of elements known. Although the chemistry of hafnium has been studied less than that of zirconium, the two are so similar that only very small quantitative differences.

Hafnium is a good absorber of neutrons and is used to make control rods, such as those found in nuclear submarines. It also has a very high melting point and because of this is used in plasma welding torches. It has been successfully alloyed with several metals including iron, titanium and niobium. Hafnium oxide is used as an electrical insulator in microchips, while hafnium catalysts have been used in polymerisation reactions.

Hafnium and its alloys are used for control rods in nuclear reactors and nuclear submarines because hafnium is excellent at absorbing neutrons and it has a very high melting point and is corrosion resistant. It is used in high-temperature alloys and ceramics, since some of its compounds are very refractory: they will not melt except under the most extreme temperatures.