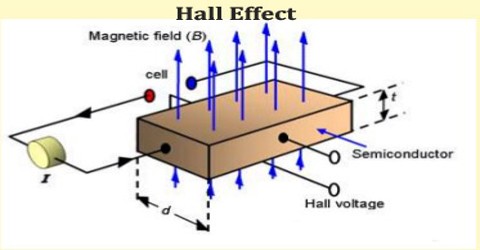 Hall Effect is a direct result of Lorentz forces acting on the charges in the current, and is named after U.S. physicist Edwin Herbert Hall (1855-1938). It is development of a transverse electric field in a solid material when it carries an electric current and is placed in a magnetic field that is perpendicular to the current.

The Hall coefficient is defined as the ratio of the induced electric field to the product of the current density and the applied magnetic field. It is a characteristic of the material from which the conductor is made, since its value depends on the type, number, and properties of the charge carriers that constitute the current. Hall Effect describes the behavior of free charge carriers in the semiconductor when subjected to the electric and magnetic fields. It is well known that a potential applied across the semiconductor material causes the electrons within it to move in the direction opposite to that of the applied field. Further, it is to be noted that, in this case, the path of the electrons will be almost a straight line. Hall Effect is a very useful phenomenon and helps to –

Determine the Type of Semiconductor:

Mobility expression for the electrons (μn) and the holes (μp), expressed in terms of Hall coefficient is given by,

Where, σn and σp represent the conductivity due to the electrons and the holes, respectively. For a two-dimensional electron system which can be produced in a MOSFET, in the presence of large magnetic field strength and low temperature, one can observe the quantum Hall effect, in which the Hall conductance σ undergoes quantum Hall transitions to take on the quantized values.

The spin Hall Effect consists in the spin accumulation on the lateral boundaries of a current-carrying sample. No magnetic field is needed. It was predicted by M. I. Dyakonov and V. I. Perel in 1971 and observed experimentally more than 30 years later, both in semiconductors and in metals, at cryogenic as well as at room temperatures.

In ferromagnetic materials and paramagnetic materials in a magnetic field, the Hall resistivity includes an additional contribution, known as the anomalous Hall effect, which depends directly on the magnetization of the material, and is often much larger than the ordinary Hall effect. Magnetic flux from the surroundings may diminish or enhance the field the Hall probe intends to detect, rendering the results inaccurate. Also, as Hall voltage is often on the order of millivolts, the output from this type of sensor cannot be used to directly drive actuators but instead must be amplified by a transistor-based circuit.