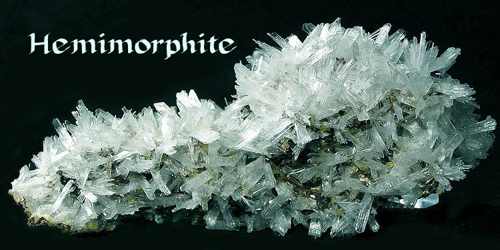 Hemimorphite is a white mineral consisting of hydrated zinc silicate in orthorhombic crystalline form: a common ore of zinc. It is also called (US) calamine. Its formula: Zn4Si2O7(OH)2.H2O. It is a sorosilicate mineral which has been historically mined from the upper parts of zinc and lead ores, chiefly associated with smithsonite, ZnCO3. This habit is responsible for Hemimorphite’s name, from the Greek hemi, meaning “half” and morph, meaning shape. Although this habit is very common among Hemimorphite crystals, its visibility is usually obscured by one end of a crystal being attached to the matrix. Hemimorphite is a mineral of two main distinct patterns: A well-crystallized form, and a microcrystalline globular form. These two types of Hemimorphite appear entirely different from each other, and it surprising that they are of the same mineral.

Hemimorphite most commonly forms crystalline crusts and layers, also massive, granular, rounded and reniform aggregates, concentrically striated, or finely needle-shaped, fibrous or stalactitic, and rarely fan-shaped clusters of crystals. Prior to 1803, Hemimorphite and Smithsonite were thought to be the same mineral, called Calamine. In 1803, James Smithson, a British mineralogist, discovered that these were two distinct zinc mineral species that closely resembled each other.

Occurrences and Properties of Hemimorphite

The name hemimorphite derives from the word “hemi” or half and “morph” meaning shape and points to a hemimorph development of crystals. This unusual crystalline form, which is typical to only few minerals, means that the crystals are terminated by dissimilar faces. It was most frequently occurs as the product of the oxidation of the upper parts of sphalerite bearing ore bodies, accompanied by other secondary minerals which form the so-called iron cap or gossan. Hemimorphite is an important ore of zinc and contains up to 54.2% of the metal, together with silicon, oxygen and hydrogen. The crystals are blunt at one end and sharp at the other. Hemimorphite is found in many localities worldwide, though most only produce microcrystals of this mineral. However, there are many exceptional localities though those have provided excellent mineral specimens. In Europe, some of the earliest occurrences of Hemimorphite were at Vieille Montagne, Kelmis, Belgium. Blue globular and white crystallized forms of this mineral are found in Germs-sur-l’Oussouet, Lourdes, France; and at the Sa Duchessa Mine, Domusnovas, and Sardinia, Italy. Colorless and white Hemimorphite crystals, sometimes associated with Wulfenite, have come from Bleiberg, Carinthia, Austria; and white crystal fans from Lavrion District, Attiki, Greece.

Its crystals are flattened prismatic and tabular, and are usually in platy groupings. Also bladed, in fan shaped groupings, radiating, acicular, coxcomb, in rosettes, and drusy. Crystals grow in distinctive hemimorphic habits. Most commonly in globular form such as botryoidal, mammilary, and stalactitic groupings. Many energy healers consider hemimorphite to be a stone of happiness and joy. The gem can be used to assist personal transformation and growth as it helps develop positive self-image and overcome the inferiority complex. The stone promotes inner balance and tranquility, and helps access one’s creative energies. It also helps protect from malice and the destructive energies of others.

In the spiritual realm, hemimorphite has the power to enhance the aura and amplify psychic abilities. It helps align the heart and throat chakras and opens the third eye. It aides meditation and clears channels to psychic communication. It helps the seeker to define his spiritual direction and find a purpose in life.