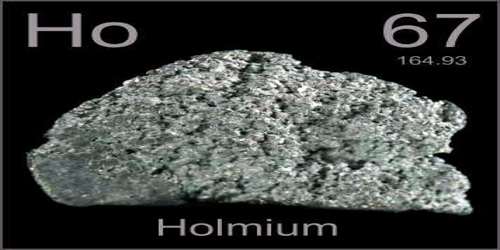 Holmium is a soft, silvery, malleable metallic element of the lanthanide series. Its compounds are highly magnetic. Its atomic number 67; atomic weight 164.930; melting point 1,461°C; boiling point 2,600°C; specific gravity 8.803; valence 3. The element’s name comes from Holmia, the Latin name for the city of Stockholm. It is mainly used in scientific research but has also been used to make electronic devices. Holmium was discovered at Geneva in 1878 by Marc Delafontaine and Louis Soret, and independently by Per Teodor Cleve at Uppsala, Sweden. Both teams were investigating yttrium, which was contaminated with traces of other rare earths (aka lanthanoids) and had already yielded erbium which was later to yield ytterbium. Cleve looked more closely at what remained after the ytterbium had been removed, and realised it must contain yet other elements because he found that its atomic weight depended on its source. He separated holmium from erbium in 1878. Delafontaine and Soret also extracted it from the same source, having seen unexplained lines in the atomic spectrum. We cannot be certain that either group had produced a pure sample of the new element because yet another rare-earth, dysprosium, was to be extracted from holmium.

Holmium has the highest magnetic permeability of any element and therefore is used for the polepieces of the strongest static magnets. Because holmium strongly absorbs neutrons, it is also used as a burnable poison in nuclear reactors.

Occurrences and Properties of Holmium

Holmium is found as a minor component of the minerals monazite and bastnaesite. It is extracted from those ores that are processed to extract yttrium. It is obtained by ion exchange and solvent extraction. The abundance of holmium in the Earth’s crust is estimated to be about 0.7 to 1.2 parts per million. It is less common than most other rare earth elements, but more common than iodine, silver, mercury, and gold. Holmium elements can be classified based on their physical states (States of Matter) e.g. gas, solid or liquid. This element is a solid. Holmium classified as an element in the Lanthanide series as one of the “Rare Earth Elements” which can located in Group 3 elements of the Periodic Table and in the 6th and 7th periods. The Rare Earth Elements are divided into the Lanthanide and Actinide series. The elements in the Lanthanide series closely resemble lanthanum, and one another, in their chemical and physical properties. Their compounds are used as catalysts in the production of petroleum and synthetic products. Holmium is a silvery metal that is soft, ductile, and malleable. Ductile means capable of being drawn into thin wires. Malleable means capable of being hammered into thin sheets. Both properties are common for metals. Holmium also has some rather unusual magnetic and electrical properties. It has a melting point of 1,470°C (2,680°F) and a boiling point of 2,720°C (4,930°F). Its density is 8.803 grams per cubic centimeter.

Holmium metal tends to be stable at room temperature. In moist air and at higher temperatures, it becomes more reactive. Holmium can absorb neutrons, so it is used in nuclear reactors to keep a chain reaction under control. Its alloys are used in some magnets.

However, holmium is now used in specialized lasers. A laser is a device for producing very bright light of a single color. The kind of light produced in a laser depends on the elements of which it is made. Holmium lasers are used to reduce abnormal eye pressure, to treat glaucoma (an eye disorder), and to repair failed glaucoma surgeries.