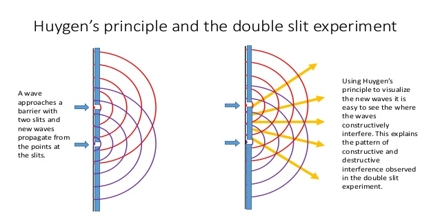 Christiaan Huygens, a contemporary of Newton, was an advocate of the wave theory of light. Huygen’s principle states that a wave crest can be thought of as a series of equally-spaced point sources that produce wavelets that travel at the same speed as the original wave. These wavelets superimpose with one another. Constructive interference occurs along a line parallel to the original wave at a distance of one wavelength from it.