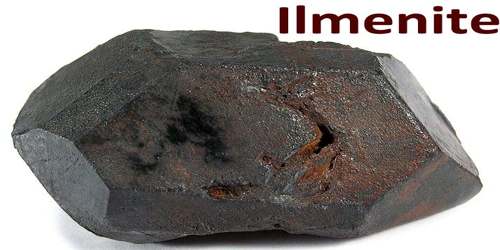 Ilmenite is a lustrous black to brownish rhombohedral mineral that is an ore of titanium. Ilmenite occurs in igneous rocks and is one of the principal dark minerals observed in beach sands. It is a weakly magnetic black or steel-gray solid. From the commercial perspective, ilmenite is the most important ore of titanium. Ilmenite is very similar in structure to Hematite, and is essentially the same as Hematite with roughly half the iron replaced with titanium. It forms solid-solution series with geikielite and pyrophanite in which magnesium and manganese, respectively, replace iron in the crystal structure. These three minerals are found disseminated or in veins in gabbro, diorite, or anorthosite, as in Quebec, New York, and Norway. Ilmenite also forms large masses, as in Iron Mountain, Wyo., and in the Ilmen Mountains, Russia, from which it derives its name. Smaller quantities are present in copper-ore veins, pegmatites, black beach sands, and placer deposits.

Occurrences, Structure and Properties of Ilment

Ilmenite most often contains appreciable quantities of magnesium and manganese and the full chemical formula can be expressed as (Fe,Mg,Mn,Ti)O3. Ilmenite forms a solid solution with geikielite (MgTiO3) and pyrophanite (MnTiO3) which are magnesian and manganiferous end-members of the solid solution series. In Canada, good Ilmenite crystals have come from Bancroft, Faraday Twp, Hastings Co., Ontario; and some of the largest crystals were found in Girardville, near Lac Saint-Jean, Quebec. In the U.S., crystals were once found in Chester, Hampden Co., Massachusetts; and a manganese-rich form from Washington, Litchfield Co., Connecticut. A massive Ilmenite came from the McIntyre Mine, Newcomb, Essex Co., New York.

The ilmenite crystal structure consists of an ordered derivative of the corundum structure; in corundum all cations are identical but in ilmenite Fe2+ and Ti4+ ions occupy alternating layers perpendicular to the trigonal c axis. Containing high spin ferrous centers, ilmenite is paramagnetic.

Ilmenite is commonly recognized in altered igneous rocks by the presence of a white alteration product, the pseudo-mineral leucoxene. Often ilmenites are rimmed with leucoxene, which allows ilmenite to be distinguished from magnetite and other iron-titanium oxides.

Ilmenite is a common accessory mineral found in metamorphic and igneous rocks. It is found in large concentrations in layered intrusions where it forms as part of a cumulate layer within the silicate stratigraphy of the intrusion. Ilmenite generally occurs within the pyroxenitic portion of such intrusions. In thick tabular and pyramidal crystals, in complex equidimensional crystals, in pseudo-octahedral crystals, and in thin hexagonal plates. Also grainy masses of such crystals, flaky and platy aggregates, rosettes, as rounded, waterworn pebbles and sands, and massive.

Ilmenite is the most important ore of the element titanium. It has recently surpassed Rutile as the main ore mineral of that metal. Ilmenite was once used as a minor ore of iron prior to the discovery of titanium as an industrially important metal.