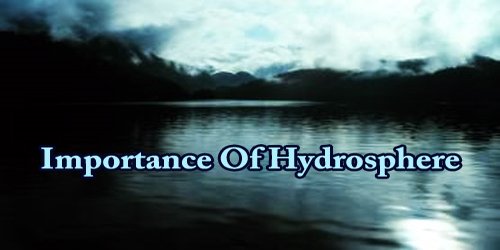 On Earth, water is the dominant substance upon the bottom surface. The forces of nature didn’t supply it’s an extensive basin, rather land as we all know it crystallized within the ocean as the upheaval of internal magma layered repeatedly through geologic processes that culminate in volcanism that also exists today. There are many factors involved in maintaining the extent of the ocean and as long as it stays constant for a minimum of the past 8000 years around, could be a sheer miracle that should make us thankful that despite some horrendously destructive acts of nature.

In other words, all of the water found on Earth is thought as Hydrosphere. Estimated to be about 361740000 square kilometers, the hydrosphere covers 70.8% of the world. It encompasses all water bodies, icebergs, also as vapor within the atmosphere. It also includes underground water, which is within the aquifers and wells.

The total mass of Earth’s hydrosphere is about 1.4 × 1018 tonnes, which is about 0.023% of Earth’s total mass. At any given time, about 20 × 1012 tonnes of this is in the form of water vapor in the Earth’s atmosphere (for practical purposes, 1 cubic meter of water weighs one tonne). Approximately 71% of Earth’s surface, an area of some 361 million square kilometers (139.5 million square miles), is covered by ocean. The average salinity of Earth’s oceans is about 35 grams of salt per kilogram of seawater (3.5%).

The hydrosphere is of great importance as it plays an integral role in the survival of all life forms. Here are some of the significant functions of the hydrosphere on Earth:

The activities of recent humans have drastic effects on the hydrosphere. As an example, water diversion, human development, and pollution all affect the hydrosphere and natural processes within. Humans are withdrawing water from aquifers and diverting rivers at an unprecedented rate. Additionally, only 1/3 of rivers are free-flowing because of the extensive use of dams, levees, and hydropower, and habitat degradation.