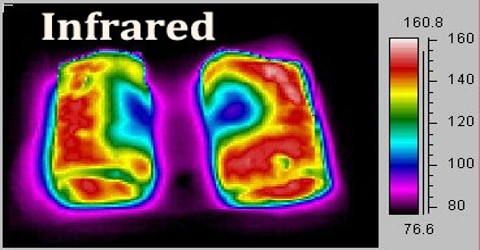 Infrared or Infrared radiation is the part of the electromagnetic spectrum with a longer wavelength than light but a shorter wavelength than radio waves; radiation with wavelength between 0.8 micrometres and 1 millimetre. It extends from the nominal red edge of the visible spectrum at 700 nanometers (frequency 430 THz), to 1000000 nm (300 GHz) although people can see infrared up to at least 1050 nm in experiments. Most of the thermal radiation emitted by objects near room temperature is infrared. Like all EMR, IR carries radiant energy, and behaves both like a wave and like its quantum particle, the photon. It is a type of electromagnetic radiation, as are radio waves, ultraviolet radiation, X-rays and microwaves. Infrared (IR) light is the part of the EM spectrum that people encounter most in everyday life, although much of it goes unnoticed. It is invisible to human eyes, but people can feel it as heat.

In 1800 the astronomer Sir William Herschel discovered infrared light while exploring the relationship between heat and light. Herschel used a prism to split a beam of sunlight into a spectrum and then placed a thermometer in each of the bands of light. He observed an increase in temperature from blue to red, including an even warmer temperature measurement just beyond the red end of the visible spectrum. It is emitted or absorbed by molecules when they change their rotational-vibrational movements. It excites vibrational modes in a molecule through a change in the dipole moment, making it a useful frequency range for study of these energy states for molecules of the proper symmetry. Infrared spectroscopy examines absorption and transmission of photons in the infrared range.

Wavelength and Frequency of Infrared

Electromagnetic (EM) radiation is transmitted in waves or particles at different wavelengths and frequencies. This broad range of wavelengths is known as the electromagnetic spectrum. The spectrum is generally divided into seven regions in order of decreasing wavelength and increasing energy and frequency. The common designations are radio waves, microwaves, infrared (IR), visible light, ultraviolet (UV), X-rays and gamma-rays. Infrared waves are longer than those of visible light, just beyond the red end of the visible spectrum. Infrared (IR) falls in the range of the (EM) spectrum between microwaves and visible light. It has frequencies from about 3 GHz up to about 400 THz and wavelengths of about 30 centimeters (12 inches) to 740 nanometers (0.00003 inches), although these values are not definitive.

Infrared or Infrared Radiation is used in applications like remote sensing which is used in weather applications. All bodies give off some thermal energy and based on this property, infrared rays have a wide variety of operations in covert operations as well. Infrared rays also find their application in the field of astronomy. The universe has many celestial bodies that are too cool and faint to be detected by visible light, scientists use infrared rays emitted by such planets, stars, moons etc. that are there in the universe to study their behavior and properties. Infrared light can also be called thermal light. The light which falls on your body when you sit near a campfire or even the light of the sun, these kinds of lights also emit some thermal energy which causes you to feel the heat. Infrared heaters also come under this where they use infrared radiation to generate thermal energy.

Uses of Infrared or Infrared Radiation

One of the most common uses of infrared radiation is in heat-sensitive thermal imaging cameras. These can be used to study human and animal body heat patterns, but more often, they are used as night-vision cameras. These have uses in warfare, as security cameras and in nocturnal animal research. It is also widely used in astronomy. Taking pictures of the universe in infrared can lead to some amazing discoveries. Astronomers can look at an area of the sky that appears empty and dark in the visual part of the electromagnetic spectrum and find the area full of activity in the infrared. Since most objects that are at all hot produce infrared radiation, whereas plenty of objects do not produce visible light, it is a vital tool in observational astronomy. It can be used as a deliberate heating source. For example, it is used in infrared saunas to heat the occupants. It may also be used in other heating applications, such as to remove ice from the wings of aircraft (de-icing). Infrared can be used in cooking and heating food as it predominantly heats the opaque, absorbent objects, rather than the air around them.