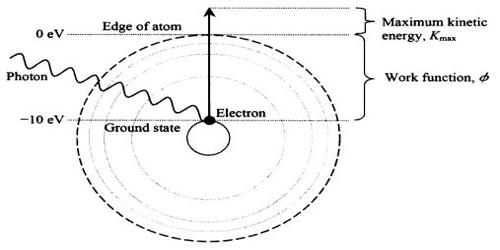 Ionization can occur through radioactive decay by the internal conversion process, in which an excited nucleus transfers its energy to one of the inner-shell electrons causing it to be ejected. It occurs whenever sufficiently energetic charged particles or radiant energy travel through gases, liquids, or solids. It can result from the loss of an electron after collisions with energetic subatomic particles, collisions with other atoms, molecules, and ions, or through the interaction with electromagnetic radiation. Charged particles, such as alpha particles and electrons from radioactive materials, cause extensive ionization along their paths.

Everyday examples of gas ionization are such as within a fluorescent lamp or other electrical discharge lamps. It is also used in radiation detectors such as the Geiger-Müller counter or the ionization chamber. The ionization process is widely used in a variety of equipment in fundamental science (e.g., mass spectrometry) and in the industry (e.g., radiation therapy). Gamma rays, X-rays, and the higher ultraviolet part of the spectrum are ionizing, whereas the lower ultraviolet, visible light (including laser light), infrared, microwaves, and radio waves are considered non-ionizing radiation.

A certain minimal level of ionization is present in the Earth’s atmosphere because of the continuous absorption of cosmic rays from space and ultraviolet radiation from the Sun. Understanding ionization is very important in studying science because ionization explains how the charge of atoms is changed and can help to explain how atoms are transformed.