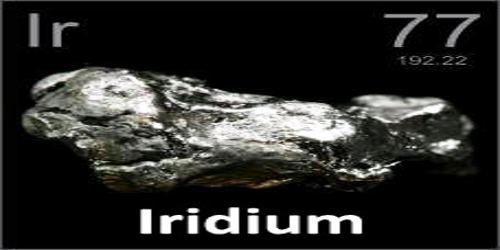 Iridium (symbol Ir) is a rare, whitish-yellow element that is the most corrosion-resistant metal known. Although only certain molten salts and halogens are corrosive to solid iridium, finely divided iridium dust is much more reactive and can be flammable. Its atomic number 77; atomic weight 192.2; melting point 2,410°C; boiling point 4,130°C; specific gravity 22.42 (at 17°C); valence 3, 4. It is very dense, hard, and brittle, and is is used to make hard alloys of platinum for jewelry, pen points, and electrical contacts. Iridium was discovered together with osmium in1803 by Smithson Tennant in London. When crude platinum was dissolved in dilute aqua regia, which is a mixture of nitric and hydrochloric acids, it left behind a black residue thought to be graphite. Tennant thought otherwise, and by treating it alternately with alkalis and acids he was able to separate it into two new elements. These he announced at the Royal Institution in London, naming one iridium, because its salts were so colourful and the other osmium because it had a curious odour.

The first iridium-ruthenium thermocouples were developed in the early 1930s and in the late 1960s, the development of dimensionally stable anodes (DSAs) significantly increased demand for the element.

Iridium is found in meteorites in much higher abundance than in the Earth’s crust. For this reason, the unusually high abundance of iridium in the clay layer at the Cretaceous–Paleogene boundary gave rise to the Alvarez hypothesis that the impact of a massive extraterrestrial object caused the extinction of dinosaurs and many other species 66 million years ago. Similarly, an iridium anomaly in core samples from the Pacific Ocean suggested the Eltanin impact of about 2.5 million years ago.

Occurrences, Production and Properties of Iridium

Iridium is one of the rarest elements on Earth. It is found uncombined in nature in sediments that were deposited by rivers. A very thin layer of iridium exists in the Earth’s crust. It is thought that this was caused by a large meteor or asteroid hitting the Earth. Meteors and asteroids contain higher levels of iridium than the Earth’s crust. The impact would have caused a huge dust cloud depositing the iridium all over the world. Some scientists think that this could be the same meteor or asteroid impact that wiped out the dinosaurs. Within Earth’s crust, iridium is found at highest concentrations in three types of geologic structure: igneous deposits, impact craters, and deposits reworked from one of the former structures. Pure iridium probably does not occur in nature; its abundance in the Earth’s crust is very low, about 0.001 parts per million. Though rare, iridium does occur in natural alloys with other noble metals: in iridosmine up to 77 percent iridium, in platiniridium up to 77 percent, in aurosmiridium 52 percent, and in native platinum up to 7.5 percent. Iridium generally is produced commercially along with the other platinum metals as a by-product of nickel or copper production.

Iridium-containing ores are found in South Africa and Alaska, U.S., as well as in Myanmar (Burma), Brazil, Russia, and Australia. In the late 20th century South Africa was the world’s major producer of iridium.

Iridium is commercially recovered as a by-product of nickel refining. Iridium salts are highly coloured. The iridescent wings of the dragonfly represent both the origin of the element’s name and its strongly coloured salts.

Iridium prices have fluctuated over a considerable range. With a relatively small volume in the world market, which is compared to other industrial metals like aluminium or copper, the iridium price reacts strongly to instabilities in production, demand, speculation, hoarding, and politics in the producing countries.

Iridium is a transition metal like the other members of the group. They are less reactive than the typical metals but more reactive than the less typical metals. The transition metals are characterized by having the outermost electron shell containing two electrons and the next inner shell an increasing number of electrons. Because of the small energy differences between the valence shells, a number of oxidation states occur. Natural iridium consists of a mixture of two stable isotopes, iridium-191 (37.3 percent) and iridium-193 (62.7 percent). The chemistry of iridium centres on oxidation states of +1, +3, and +4, though compounds of all states from 0 to +6 are known with perhaps the exception of +2. Complexes in oxidation state +1 chiefly contain carbon monoxide, olefins, and phosphines as ligands. The anions hexachloroiridate, [IrCl6]2−, and hexabromoiridate, [IrBr6]2−, are the only notable chemical species containing iridium in the +4 oxidation state. Iridium is somewhat more reactive than ruthenium and osmium.

Iridium is the most corrosion-resistant material known. It is used in special alloys and forms an alloy with osmium, which is used for pen tips and compass bearings. It was used in making the standard metre bar, which is an alloy of 90% platinum and 10% iridium. It is also used for the contacts in spark plugs because of its high melting point and low reactivity. Pure iridium is extremely brittle, to the point of being hard to weld because the heat-affected zone cracks, but it can be made more ductile by addition of small quantities of titanium and zirconium (0.2% of each apparently works well). The pigment iridium black, which consists of very finely divided iridium, is used for painting porcelain an intense black; it was said that “all other porcelain black colors appear grey by the side of it”.