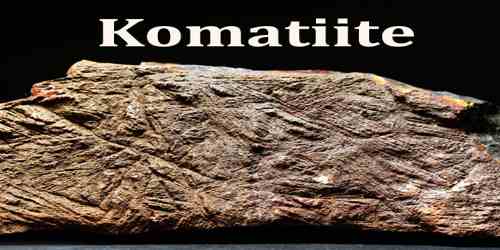 Komatiite is relatively common in Archean greenstone belts, rare in Proterozoic belts, and virtually absent in younger regions. The type area is the 3.5 Ga Barberton greenstone belt of South Africa where the rock type was first discovered. True komatiites are very rare and essentially restricted to rocks of Archean age, with few Proterozoic or Phanerozoic komatiites known. This restriction in age is thought to be due to cooling of the mantle, which may have been up to 500 °C hotter during the early to middle Archaean. The komatiites of Gorgona Island off the coast of Colombia are the sole well-documented example of Phanerozoic komatiite. The older, 3.5 Ga komatiites have different chemical compositions from younger komatiites, being characterized by high CaO/Al2O3 and low Al2O3/TiO2.

Komatiite is a high-Mg volcanic rock. It’s SiO2 ranging at 30 – 52 wt. % and Na2O a K2O (< 2 hmot. %) contents project in the TAS diagram in the fields of basalt, picrobasalt or foidite (shaded area). However, it discriminates from these rock types by a high MgO (> 18 wt. %) and TiO2 contents (< 1 wt. %). Meimechite is a similar rock type with identical SiO2, alkalis and MgO contents, however, it differs by an increased TiO2 content, > 1 wt. %. Kerr and Arndt (2001) proposed to avoid the strictly chemical classification of komatiites and to consider only the typical spinifex texture. This should discriminate some picrites without the corresponding texture to be classified as komatiites. Komatiite was named after type locality – the Komati River in Kaapvaal Craton (the Barberton belt) in the South-African Republic. Major minerals of komatiite are: Forsterite olivine (Fo≥90), Ca-Cr pyroxene creating porphyric phenocrysts with skeletal and needle/like shapes, Ca-plagioclase (An≥85) is a groundmass phase together with glass.

Komatiitic lava was extremely fluid when it erupted (possessing the viscosity closes to that of water but with the density of rock). Compared to the basaltic lava of the Hawaiian plume basalts at ~1200 °C, which flows the way treacle or honey does, the komatiitic lava would have flowed swiftly across the surface, leaving extremely thin lava flows (down to 10 mm thick). The major komatiitic sequences preserved in Archaean rocks are thus considered to be lava tubes, ponds of lava etc., where the komatiitic lava accumulated. Komatiite volcano morphology is interpreted to have the general form and structure of a shield volcano, typical of most large basalt edifices, as the magmatic event which forms komatiites erupts less magnesian materials.

Almost all komatiites are metamorphosed, thus correspoding in fact to metakomatiites. However, the prefix Meta is usually left out. Komatiites form lava flows of small thickness within basaltic volcanic fields. Ultramafic komatiites display the spinifex texture named after an Australian grass. The texture originates during rapid quenching of melts rich in olivine crystallites. They are often replaced by secondary minerals. Typical spinifex-type komatiites are characteristic of mutually intersecting bladed olivine crystals.