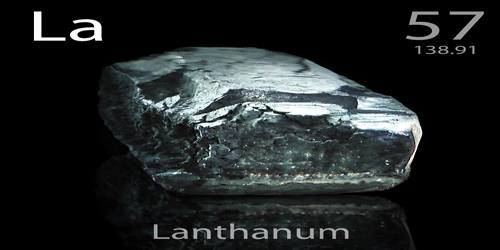 Lanthanum is a soft, malleable, silvery-white metallic element of the lanthanide series. It is the eponym of the lanthanide series, a group of 15 similar elements between lanthanum and lutetium in the periodic table, of which lanthanum is the first and the prototype. It is also sometimes considered the first element of the 6th-period transition metals and is traditionally counted among the rare earth elements. Its atomic number 57; atomic weight 138.91; melting point 920°C; boiling point 3,469°C; specific gravity 5.98 to 6.186; valence 3. Lanthanum was discovered in January 1839 by Carl Gustav Mosander at the Karolinska Institute, Stockholm. He extracted it from cerium which had been discovered in 1803. Mosander noticed that while most of his sample of cerium oxide was insoluble, some was soluble and he deduced that this was the oxide of a new element. News of his discovery spread, but Mosander was strangely silent.

It is used to make glass for lenses and lights for movie and television studios.  The rare earth elements are very similar to each other. Separating them is a very difficult task. The ores are first treated with sulfuric acid (H2SO4). The materials produced are then passed through a series of steps and the individual elements separated from each other.

Occurrences and properties of Lanthanum

Lanthanum is relatively common in the Earth’s crust. Its abundance is thought to be as high as 18 parts per million. That would make it nearly as common as copper or zinc . Unlike those metals, however, it usually does not occur in one place, as in copper mines. Instead, it is spread widely throughout the Earth’s crust. Its most common minerals are monazite, bastnasite, and cerite. These minerals generally contain all the other rare earth elements as well.

Its elements can be classified based on their physical states (States of Matter) e.g. gas, solid or liquid. This element is a solid. Lanthanum classified as an element in the Lanthanide series as one of the “Rare Earth Elements” which can locate in Group 3 elements of the Periodic Table and in the 6th and 7th periods. The Rare Earth Elements are divided into the Lanthanide and Actinide series. The elements in the Lanthanide series closely resemble lanthanum, and one another, in their chemical and physical properties. Their compounds are used as catalysts in the production of petroleum and synthetic products. Lanthanum is a white, ductile, malleable metal. Ductile means capable of being drawn into thin wires. Malleable means capable of being hammered into thin sheets. It is relatively soft and can be cut with a sharp knife. Its melting point is 920°C (1,690°F) and its boiling point is 3,454°C (6,249°F). Its density is about 6.18 grams per cubic centimeter. It is is a very active metal. It reacts with most acids and with cold water, although slowly. With hot water, it reacts more quickl.

Two naturally occurring isotopes of lanthanum are known. They are lanthanum-138 and lanthanum-139. Isotopes are two or more forms of an element. Isotopes differ from each other according to their mass number. Lanthanum metal has no commercial uses. However, its alloys have a variety of uses. A lanthanum-nickel alloy is used to store hydrogen gas for use in hydrogen-powered vehicles. Lanthanum is also found in the anode of nickel metal hydride batteries used in hybrid cars.

Lanthanum is an important component of mischmetal alloy (about 20%). The best-known use for this alloy is in ‘flints’ for cigarette lighters.‘Rare earth’ compounds containing lanthanum are used extensively in carbon lighting applications, such as studio lighting and cinema projection. They increase the brightness and give an emission spectrum similar to sunlight.

Lanthanum (III) oxide is used in making special optical glasses, as it improves the optical properties and alkali resistance of the glass. Lanthanum salts are used in catalysts for petroleum refining.