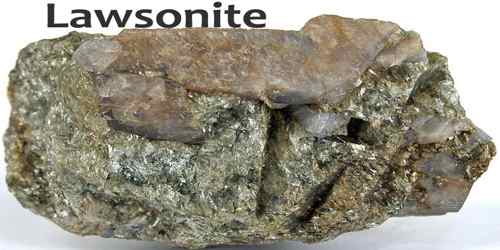 Lawsonite is an uncommon mineral that occurs at high pressures and low temperatures in regionally metamorphosed, low-grade, glaucophane-bearing schists. It can also form from plagioclase during its alteration to saussurite in gabbro and diabases and can be found rarely in eclogite. Localities include in the USA, localities in the French-Italian Alps, Turkey, Japan, New Caledonia, and on Celebes Island. It forms transparent to translucent colorless, white, and bluish to pinkish grey glassy to greasy crystals. Refractive indices are nα=1.665, nβ=1.672 – 1.676, and nγ=1.684 – 1.686. It is typically almost colorless in thin section, but some lawsonite is pleochroic from colorless to pale yellow to pale blue, depending on orientation. The mineral has a Mohs hardness of 8 and a specific gravity of 3.09. It has perfect cleavage in two directions and a brittle fracture.

Lawsonite is a metamorphic mineral typical of the blueschist facies. It also occurs as a secondary mineral in altered gabbro and diorite. Associate minerals include epidote, titanite, glaucophane, garnet and quartz. It is an uncommon constituent of eclogite.

Occurrences and Properties of Lawsonite

Lawsonite is a typical mineral of the glaucophane schist facies associated with chlorite, titanite, glaucophane, quartz, epidote, and garnet. Also found as a secondary mineral in altered gabbros and diorates.Generally located on the Tiburon Peninsula in San Francisco Bay, California. It is a common constuent of schists and gneisses formed under high pressure and low temperature. Common in low grade mafic metamorphic rocks. It was first described in 1895 for occurrences in the Tiburon peninsula, Marin County, California. It was named for geologist Andrew Lawson (1861–1952) of the University of California by two of Lawson’s graduate students, Charles Palache and Frederick Leslie Ransome. Its crystals are usually prismatic or tabular, and they are often crude and of grainy appearance. Also in groupings of stubby or tabular crystals. May also be granular and massive. Crystals are sometimes twinned. It has three refractive indices of nα = 1.665 nβ = 1.672 – 1.676 nγ = 1.684 – 1.686, which produces a birefringence of δ = 0.019 – 0.021 and an optically positive biaxial interference figure.

Lawsonite is a significant metamorphic mineral as it can be used as an index mineral for high pressure conditions. Index minerals are used in geology to determine the degree of metamorphism a rock has experienced. New metamorphic minerals form through solid-state cation exchanges following changing pressure and temperature conditions imposed upon the protolith. This new mineral that is produced in the metamorphosed rock is the index mineral, which indicates the minimum pressure and temperature the protolith must have achieved in order for that mineral to form.