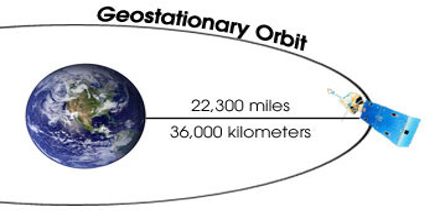 For a satellite to be in a particular orbit, a particular velocity is required or a given height above Earth ‘r0+h’. Telecommunications satellites remain above one given point on the Earth’s surface, so are called geostationary, example: broadcast television, forecast the weather. Spy Satellites move in a polar orbit so that they can perform sweeps of the surface; example: spy on enemy forces. A geostationary satellite is an earth-orbiting satellite, placed at an altitude of approximately 35,800 kilometers directly over the equator, that revolves in the same direction the earth rotates (west to east).